The Navy is shedding more light on its new information-warfare task force for Pacific Fleet.

Officials have previously alluded to the creation of the task force, but provided little information.

Speaking at the McAleese Defense Programs Conference March 9, Adm. Michael Gilday, chief of naval operations, didn’t provide many details other than the task force will be led by a one-star admiral. That individual is Rear Adm. (lower half) Michael J. Vernazza, who has been selected for promotion to Rear Admiral (upper half).

“The establishment of FIWCPAC recognizes the critical role of information warfare to our Fleet leaders in enabling operations in all domains – IW affects every mission, everywhere,” the spokesperson said, adding it was established to enable effective concepts such as Distributed Maritime Operations, Expeditionary Advanced Base Operations, and Littoral Operations in a Contested Environment..

The task force will work across the Department of Navy, fully integrating it Marine Corps brethren, especially as the Corps invests in its new occupational field 17XX, information maneuver.

The Navy recently put a lot of its information warfare and emerging concepts to the test during its Large Scale Exercise.

The event, which took place Aug. 3-16, 2021, sought to experiment with how the Navy conducts distributed maritime operations – the service’s nomenclature for its operating concept that the fleet must be able to operate in a more dispersed manner – as well as test new structures and mechanisms for conducting information warfare and command and control in contested environments.

While not offering specifics, the spokesperson added that numerous observations and insights about areas for improvement were collected at the exercise and are under evaluation. Overall, the Navy was pleased with the outcome of the event, providing an opportunity to focus on a common understanding of the role of information warfare at the operational level of war and how these types of capabilities are linked across distributed forces.

“LSE 2021 demonstrated how we are continually working to integrate IW across all domains, from the tactical to operational levels of war in order to test naval warfighting concepts like distributed maritime operations, expeditionary advanced base operations and littoral operations in a contested environment,” the spokesperson said. “The U.S. Navy’s ability to conduct integrated operations around the globe, across the full spectrum of military operations, is a core requirement for maintaining maritime superiority during this era of strategic competition.”

Information warfare activities during the exercise were conducted onboard the Kearsarge Amphibious Ready Group and through the maritime operations centers of Second, Sixth, Tenth and Pacific Fleets, as well as Fleet Forces Command and Naval Forces Europe, the spokesperson said.

One of the concepts or ideas that was tested was placing an information warfare commander at the expeditionary strike group level as opposed to the carrier strike group level. This allowed the Navy to evaluate this concept from the operational level to the tactical level within an amphibious environment.

Building upon the lessons learned from Large Scale Exercise, the Navy and Marine Corps are identifying information warfare priorities and capability gaps for 2023 and across the future years defense program, the spokesperson said. 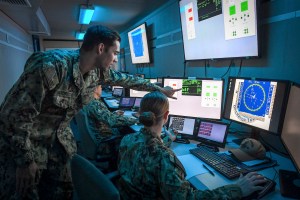