The Pentagon is pursuing new space-based sensors, communications systems and other capabilities to improve situational awareness. But it needs AI to better crunch and share the data it collects.

“This year’s budget, I think, moves the ball down the field with regards to domain awareness. We’ll be able to hopefully field over-the-horizon capabilities, which will give us more standoff distance than what we currently have today. But we also need to take that domain awareness — the sensors that we have today and any potential new sensors — and share that data and information, and utilize artificial intelligence and machine learning to make that data and information available sooner than we have in the past to decision-makers,” Gen. Glen VanHerck, commander of U.S. Northern Command (Northcom) and North American Aerospace Defense Command (NORAD), told the Defense Writers Group.

Northcom is an American combatant command whose area of responsibility encompasses North America.

NORAD is a joint U.S.-Canadian organization tasked with aerospace warning, aerospace control and maritime warning for North America, including the detection, validation, and warning of attack against North America by aircraft, missiles, or space vehicles.

“I don’t have what I need as far as artificial intelligence and machine learning to give the [needed] decision space to the president, the secretary of defense, the chief of the defense staff in Canada, the minister of defense and the prime minister in Canada,” VanHerck said.

AI and ML are needed to create more deterrence options and enable “decision superiority,” he said.

The U.S. homeland faces growing threats including from hypersonics and cruise missiles that could be launched from Russian or Chinese ships and aircraft. In the future, adversaries could even base cruise missiles on container ships disguised as civilian vessels, he said.

“The urgency is there in my mind,” VanHerck said.

NORAD has a “pathfinder” program that aims to better use information that’s available today through radars that are part of the North Warning System that stretches across Canada and Alaska.

“We only process about 2% of the data [but] the system actually has capability to give you a lot more domain awareness. And so what we’re doing with the Pathfinder program is … we’re taking the raw data — 100% of the information — and fusing that and using artificial intelligence and machine learning and distributing that information to gain time and space, if you will,” for decision-makers, he said.

But that’s not sufficient, according to VanHerck.

“What I’m focusing on is a global look across all domains and fusing data and information,” he said.

NORAD, Northcom and the other combatant commands have been conducting a Global Information Dominance Experiment (GIDE) to demonstrate the benefits of using AI to enhance global collaboration among U.S. forces. Four such experiments have already been held.

The experiments demonstrated that artificial intelligence and machine learning technology can detect changes in an adversary’s military posture — such as the movement of platforms or weapons — fuse that information and alert U.S. forces, according to VanHerck.

“We’re not creating new data. We’re taking machines that can take existing data, analyze it faster, and alert you to it so you can create deterrence and defense options if you need to,” he said.

Now that the four GIDE experiments have wrapped up, VanHerck hopes that Pentagon leaders will grab the baton and forge ahead with the technology.

“Candidly, we’re not moving fast enough for me. We can’t apply what I say are industrial age, industrial base processes to software-driven capabilities. In today’s environment, the department has to change to fundamentally go faster,” he said. “We can’t utilize what I would say are legacy development processes where we do everything in serial.”

He continued: “I think we’re ready to field some of these capabilities, specifically when you’re focused at the operational to strategic level where what we’re trying to do is give increased decision space to our nation’s most senior leaders” so that they have more time to take action to deter adversaries or defeat their attacks.

Providing those capabilities would reduce the probability of a successful attack on the U.S. homeland and strategic deterrence failure, he said.

“This is something I’m very passionate about and something that we have to move forward with sooner than later,” VanHerck said. 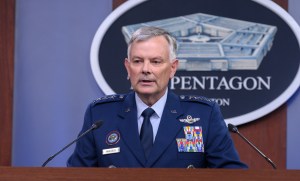