The new Phoenix Ghost suicide drone that the U.S. is supplying to Ukraine was a project overseen by a secretive Air Force office known as Big Safari, the Pentagon’s top weapons buyer revealed Friday.

The Biden administration on April 21 publicly revealed the system’s existence when it announced that it planned to send more than 120 of them to Ukraine as part of a broader security assistance package.

The research-and-development effort for the weapon was overseen by the 645th Aeronautical Systems Group, also known as Big Safari, which works on special projects, Undersecretary of Defense for Acquisition and Sustainment William LaPlante told reporters at the Pentagon. The organization is based at Wright-Patterson Air Force Base, Ohio.

“If you know anything about that office, they do lots of really great, fast-type work. They were very active during Afghanistan and Iraq” wars, he said.

The Phoenix Ghost tactical unmanned aerial system was already being developed by the U.S. military and AEVEX Aerospace before the recent Russian invasion began on Feb. 24.

“The Air Force was working on this and, in discussions with the Ukrainians again about their requirements, we believed that this particular system would very nicely suit their needs, particularly in eastern Ukraine,” Pentagon Press Secretary John Kirby told reporters last month.

On Friday, Kirby told reporters that a cohort of about 20 Ukrainian soldiers is about to wrap up a week-long training course on how to use the system.

LaPlante said that in the future the Pentagon may use an indefinite-delivery/indefinite-quantity (IDIQ) contract mechanism that will make it easier to buy additional Phoenix Ghost systems.

IDIQ is “a contract that has a ceiling on it but that you can put individual task orders against it. The nice thing about that is if later on, you have a contract already set up … if you want to go back and buy more of something even more than we originally planned,” he said. “It’s pretty straightforward to do it. I’m pretty sure we will have that arrangement in that case.” 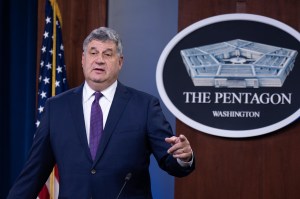