The Marine Corps’ top officer sees loitering munitions as a key capability for the future force as the military service aims to boost the lethality and reconnaissance capabilities of its small units.

Loitering munitions, also known as kamikaze drones or suicide drones, are primarily designed to go on one-way missions where they fly around until they find a target and then crash into it to destroy it. Equipped with sensors, they can also provide intelligence information about the location of enemy forces.

The tactical unmanned aerial systems offer advantages over more traditional fires such as mortars and artillery, which have a predictable ballistic trajectory and rely on prepositioned targeting, Marine Commandant Gen. David Berger told FedScoop Tuesday during remarks at the Modern Day Marine conference in Washington.

“The advantage of having all the way down to the squad level a weapon system that can fly, can shoot even maybe out of a mortar tube and loiter for 40-45 minutes, [or] out of a vehicle that can loiter for 90 minutes … is huge, because at the time that you launch that munition either A, you may not have a precise location for the target, or B, it may be moving,” Berger said. “It gives you so much flexibility to engage either targets that are concealed or targets that are moving because of the loiter time.”

Deploying such weapons could also enable the Marines to mess with the minds of their enemies, according to Berger.

“From an infantry ground guy perspective, it’s incredibly frustrating to know that there’s a loitering munition up above your head. There’s a psychological impact,” he said.

Such weapons could be remote-controlled or operate autonomously.

The Corps has been experimenting with these types of drones as part of its “campaign of learning” that is informing Berger’s vision for the future known as Force Design 2030.

The experimentation, which has included arming an unmanned service vessel with loitering munitions, has already demonstrated the “potency” of that kind of capability, Berger said.

The ongoing conflict in Ukraine has also highlighted the utility of kamikaze drones.

The United States is providing hundreds of Switchblade systems to Ukraine to help the country in its battle against Russian invaders. The Department of Defense is also supplying a newly developed weapon known as Phoenix Ghost — a project overseen by the Air Force’s secretive “Big Safari” office.

More than 20 of the 121 Phoenix Ghost systems slated for delivery to Ukraine have already arrived. The first cohort of Ukrainian soldiers to be trained on the system recently wrapped up a week-long training course with American instructors at Ramstein Air Base in Germany.

“How many of you have seen any of the YouTube videos coming out of Ukraine on loitering munitions?” Berger asked the conference attendees. “Yeah, me too,” he said after a number of hands went up.

Navy Secretary Carlos Del Toro, speaking at the conference, also highlighted the importance of these types of unmanned aerial systems.

“Drone technology that’s evolved in the past 20 years, quite frankly, has been transformational on the battlefield. And it’s exactly the type of technology that we need to embrace in order to win conflicts in the future,” he said. 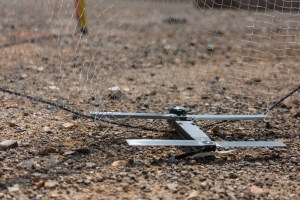