Constructed under a cost-type contract worth roughly $300 million, contingent on options selected, this small nuclear device is set to be delivered for testing at Idaho National Laboratory in 2024. It will also mark the highly anticipated outcome of the Defense Department Strategic Capabilities Office’s (SCO) years-in-the-making Project Pele.

“The cost of construction is not $300M. Part of the money is finalizing design, part is modeling/experimentation to answer regulatory questions, and part is to stand up new manufacturing capabilities,” Project Pele Program Manager Jeff Waksman clarified on LinkedIn shortly after the announcement.

Microreactors, which generate up to 50 megawatts of power, can operate as part of, or independently from, the electric grid. These small technological tools can be deployed to help confront energy challenges in a range of areas, particularly, for DOD purposes, in austere or disaster-stricken environments.

The SCO launched Project Pele after a study led by the Defense Science Board in 2016 suggested conflict-related energy usage will likely grow significantly in the coming decades, and that DOD’s needs could outpace technological improvements to support it.

DOD relies on an estimated 30 terawatt-hours of electricity per year — that’s more than some small countries — and more than 10 million gallons of fuel per day. As the review determined, those levels are expected to increase in the long- and near-term, partly due to fleet electrification and maturing power-intensive capabilities.

But a small, safe, moveable nuclear reactor could help meet this demand.

An environmental analysis that’s required for the making of such a reactor and design competition were conducted beginning in March 2020. Then, in April 2022, the SCO issued a record of decision affirming plans to develop an “inherently safe by design” transportable microreactor that is capable of providing 1 to 5 megawatts of electrical power for 3 years, at minimum.

Engineering designs from Greenbelt, Maryland-based X-energy, LLC, and Lynchburg, Virginia-headquartered BWXT were named as the top two considered in the competition. On Thursday, the latter announced it was selected to move forward.

“Incredibly thankful for the amazing work by both teams on Project Pele. Now it’s time to bend metal,” Waksman said in a LinkedIn post sharing the announcement.

BWXT is the prime contract and integration lead that will steer the manufacturing of the reactor module. Other companies playing key roles in the program include Northrop Grumman, Aerojet Rocketdyne, Rolls-Royce LibertyWorks and Torch Technologies, Inc.

This prototype will be built over the next couple years by more than 100 personnel at BWXT facilities in Lynchburg and Euclid, Ohio.

Once completed, the high-temperature gas-cooled nuclear reactor will be haulable in commercially available shipping containers. It is designed to be transferred by road, rail, sea or air, and assembled for operation within 72 hours, according to BWXT’s announcement. The device and its high-assay low-enriched uranium fuel will be sent separately to Idaho National Lab. There, the reactor will be fully set up, taken apart, reassembled and ultimately evaluated for up to three years.

A BWXT spokesperson told FedScoop on Friday that the company is not providing further details on the near-term development timeline or other inquiries at this point.

The Pentagon will determine whether or not to transition the technology for operational use following the completion of the full demonstration.

Though the Pele reactor will be the first of its kind for America, China demonstrated the world’s first prototype of such micro nuclear capabilities in 2021. 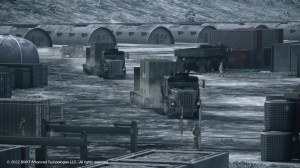