NATO leaders on Thursday officially launched a $1 billion innovation fund that will invest in companies working on a slew of dual-use technologies with great military potential.

Billed as the world’s first “multi-sovereign” venture capital fund involving 22 nations, it is intended to make long-term investments in startups and other entities developing emerging technologies that the alliance is interested in including artificial intelligence, autonomy, big-data processing, quantum-enabled technologies, biotechnology and human enhancement; novel materials; energy; propulsion and space.

“This fund is unique,” NATO Secretary General Jens Stoltenberg said during a signing ceremony at a summit in Madrid where alliance leaders inked a letter of commitment pledging to support the initiative. “With a 15-year timeframe, the NATO Innovation Fund will help bring to life those nascent technologies that have the power to transform our security in the decades to come, strengthening the Alliance’s innovation ecosystem and bolstering the security of our one billion citizens.”

The summit was attended by President Biden, his alliance counterparts and other world leaders.

Together with the new Defense Innovation Accelerator for the North Atlantic (DIANA), the fund will help the alliance “harness the best new technology for transatlantic security,” Stoltenberg said at a press conference Wednesday. The DIANA initiative will provide innovators access to facilities that they can tap into, including more than 60 test centers across Europe and North America.

DIANA “will support NATO’s efforts to boost interoperability and ensure that every Ally has access to cutting-edge technological solutions for military needs,” according to a White House fact sheet released Wednesday.

The United States will contribute to that initiative by facilitating access to U.S. test centers and other technology “accelerator sites” in the “extensive and diverse U.S. innovation sector,” according to the White House.

During the summit, NATO also unveiled a new Strategic Concept that emphasized the need to adopt emerging technologies to improve the alliance’s defense capabilities. 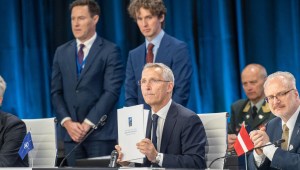