ISR capabilities enable officials to gather intel about adversaries by tracking their behavior and movements. Much of what NRO does is classified, but the office has been capturing and supplying ISR data from satellites to help focus military efforts and natural disaster response throughout its more than 60 years of existence. Now though, as the strategic environment and technologies are quickly evolving, senior leaders see the need to reshape how U.S. agencies work together.

“We need information faster and we need to deliver it quicker — and we have even more denied areas” to contend with, Scolese noted at a virtual forum hosted by the Mitchell Institute for Aerospace Studies.

Challenges associated with the division of different government entities’ responsibilities for ISR have also been repeatedly spotlighted since the Space Force’s establishment in 2019.

“[NRO has] a lot of experience that we can bring to bear on [ISR], and we’re working very closely with the Air Force and the Space Force [to address] how we go about doing that. How do we take what we’ve learned and what capabilities we have to solve a very urgent problem? There’s a study that’s going on right now that we’re doing jointly that’s going to inform how we move forward on that,” Scolese said. “We recognize that we have to work together in order to develop that capability at scale that we’re going to need as we work in more denied areas.”

That study is not yet complete, “but is going well,” Scolese added — though he didn’t provide further details. At this point, he said, major shifts to the NRO’s role of providing overhead reconnaissance to the nation are not expected.

“I certainly haven’t heard of any indications that there’s a fundamental change in that sense of responsibility,” Scolese noted.

His remarks came about a week after Air Force Secretary Frank Kendall affirmed a new informal agreement for collaboration between the National Reconnaissance Office and the Department of the Air Force — which includes the Space Force — and the potential for more co-funded projects to accelerate the delivery of intel solutions to meet demands.

“Secretary Kendall and I talk regularly,” Scolese said. In his view, the NRO’s long-standing relationships with the Air Force, Space Force and U.S. Space Command are currently “expanding to recognize that, again, the world is changing.”

“We all know that Russia and China are becoming very aggressive with space weapons. They want to take away our advantage in space. So, we have to deal with that,” Scolese said. 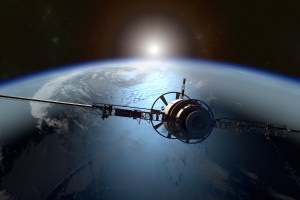