WRIGHT-PATTERSON AIR FORCE BASE, Ohio — As the threat of laser strikes against pilots escalates, the Federal Aviation Administration is assessing advanced laser eye protection engineered by the Air Force Research Laboratory for more widespread commercial use.

Years in-development, those tangerine-ish colored lenses on notably dainty spectacles were one of multiple mechanisms and capabilities AFRL officials highlighted for Deputy Defense Secretary Kathleen Hicks during her stop at Wright-Patterson Air Force Base last week. At that Ohio-based lab, Hicks received classified briefings largely focused on several research efforts and capability advances associated with counter-directed energy technology that she said “will pay off as we look at potential adversary use.”

“As we already know just from laser pointers at commercial aircraft, for instance, that [there’s] already manifested use of directed energy and lasers, against either civilian targets — or as we look at the military, potential use on a more significant scale. So, really good work going on here to get after that problem set on the material sciences side,” Hicks told reporters towards the end of her AFRL tour. “I’m very happy with what I saw.”

When lasers are pointed at pilots’ eyes — on the battlefield or during commercial flights — it makes it very hard for them to see and can even force them to completely lose visual acuity. It’s a federal crime to aim lasers at aircraft, but also increasingly more common.

“It’s a huge threat to our pilots — both commercial and military,” Richard Vaia, AFRL’s chief scientist for materials and manufacturing, told reporters during a briefing at the lab. “There’s been reports in the news, open reports, of this impacting the military operations. So in Africa, Australia — Navy pilots [recently] reported lasers in the South China Sea. And just in general, the FAA has reported incidents that are just skyrocketing year-after-year from commercial pilots. So, folks using directed energy to change the behavior of our personnel is a threat.”

The lab has a large materials and manufacturing directorate-led program confronting that specific threat from different angles. Officials on the personnel protection team explore and develop capabilities that can protect structures, sensors, platforms and pilots’ eyes from laser strikes. They are working on pursuits that are “very far out there — putting nanostructures on surfaces so that you can actually reject certain wavelengths of light or route certain wavelengths of light,” Vaia said.

Many commercial manufacturers have created and offered laser eye protection in recent years to support military and police pilots, but the products generally work by filtering out green or red light largely associated with lasers. That change in views of certain light, though, can make it harder for pilots to see certain elements and color indications on the instrument control panels of the machinery they fly.

Over the last decade, researchers and scientists have been pushing R&D of laser eye protection options that solve that problem. It all recently culminated in recent tests of Commercial Aviation Low Intensity (CALI) — a tool officials produced by modifying the cockpit compatibility design software developed for Defense Department laser eye protection, for commercial use.

Matthew Lange is a research scientist who heads the personnel protection team. He named CALI, and with his retired predecessor Bryan Edmonds and many others helped pioneer the eyewear.

“We can make the CALI design in spectacles and ballistics,” Lange told FedScoop at AFRL, referring to the lab’s industrial partners who can manufacture the different technologies and components of the protective glasses — including sleek frames that cover the face but don’t interfere with ear covers pilots must wear while in the cockpit.

AFRL also relied on commercial-off-the-shelf dyes for the lenses.

“For CALI, we used all [International Traffic in Arms Regulations] unrestricted protection levels as determined by the State Department,” Lange noted.

Pilots from the Washington State Patrol tested CALI out last year and ultimately shared rave reviews. When asked by FedScoop about plans to share the spectacles with other units or police departments, Lange responded that he “sent a box of these to the FAA, and they’re doing flight testing actively.”

“Presumably, there’ll be a policy statement when they’re done,” he added, noting that those tests will likely take a while. “But we’re expecting the first round of evaluations from the FAA soon. We hope to hear good news — but if we don’t, we’ll fix it.”

Given the sensitive nature of the topics, Hicks did not share much with reporters about her classified briefings at AFRL while on the trip, but she confirmed discussions were partially focused on in-development counter-directed energy applications.

“For both the Air Force and for the Space Force, this is a big issue area and an area where they have invested in over time,” Hicks said. “I was able to see capabilities already fielded, and then the potential for more capabilities down the road.” 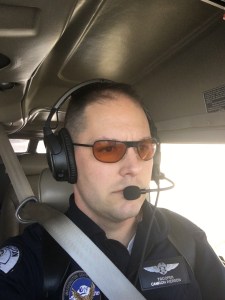