The next year will be a critical time for both the Army and prime contractor Lockheed Martin to test much needed electronic warfare equipment and inform decisions about production and fielding.

The Army divested much of its EW tools after the Cold War and currently lacks any program-of-record jamming capability to confuse or defeat adversaries in this increasingly essential facet of warfare.

Lockheed has been awarded contracts for two key upcoming programs of record, which will be undergoing important tests in 2023 that will lead to fielding decisions.

The first is the Multi-Function Electronic Warfare Air Large system, which is a jamming pod initially designed to be mounted on an MQ-1C Gray Eagle drone. However, the Army is shifting its requirement to make the pod system-agnostic.

The second capability in the works is the Terrestrial Layer System-Brigade Combat Team, an integrated cyber, EW and signals intelligence system that will be mounted to a Stryker vehicle.

“Next year is a big year for us and the Army and really getting these capabilities across the goal line,” Max Pelifian, director for strategy and business development at Lockheed Martin, said in an interview on Monday. “Looking forward to really getting production kit out into the field and into the Army’s hands.”

Pelifian said there are a number of upcoming milestones for MFEW including development tests in February and soldier touchpoints in April. They will help inform the production decision to fulfill the need for 55 MFEW pods.

For TLS-BCT — which Lockheed was awarded the last phase of its Other Transaction agreement for the system in July — there will be an operational assessment in September of the first unit issued. That event will inform the Army’s decision to proceed to production of the Stryker variants, Pelifian said.

Additionally, the Army has been looking at a dismounted option to accompany the TLS-BCT capability. Pelifian noted that Lockheed is very focused on the vehicle-mounted configuration at the moment. However, in concert with the Army, the company is looking at understanding the best of breed for the dismounted capability, which he said will likely be an off-the-shelf tool.

Additionally, Lockheed — along with General Dynamics Mission Systems — was awarded a contract to develop a prototype and conceptual design for a third key electronic warfare system for the Army, the TLS-Echelons Above Brigade. This system is meant to provide larger echelons with deep sensing abilities across much longer distances.

These standards essentially allow systems to be much more modular, allowing software updates to be rapidly inserted into capabilities on-the-fly by inserting cards. This is much different than the hardware-centric paradigm in which capability could not be updated in the field as the threat evolved.

“We have invested significantly in developing an open architecture capability for primarily the Army in developing converged cyber, EW and SIGINT, but that really conform to the CMOSS standard,” Pelifian said. “With that standard, we’ve been able to make sure that the system that we’ve architected can rapidly develop and deploy new techniques. As threats change, we’re able to quickly and easily insert new capability to counter and defeat some of the techniques that our adversaries can develop over time.” 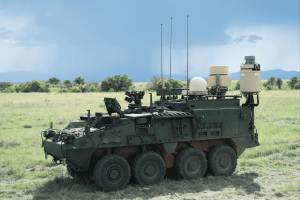 2023 to be pivotal year for new Army electronic warfare systems