This year’s premier military hacker conference will be heavily informed by the conflict in Ukraine, with an unofficial theme of “crowdsourcing conflict.”

AvengerCon VII, set to kick off Wednesday and continue through Thursday, is a soldier-led conference for hackers across the Department of Defense. It is put on by the Army’s 780th Military Intelligence Brigade, but open to all members of U.S. Cyber Command.

“The theme that we informally decided on for AvengerCon this year was talking about crowdsourcing conflict. What we thought about was the Ukraine conflict was at the top of our minds when we picked this theme out — and the various efforts of the Ukrainian IT army and folks doing OSINT publicly on Twitter and the general phenomenon of people affecting global events as a general public,” Capt. Jacob Heybey, one of the conference organizers, told DefenseScoop in an interview.

While they’re not confining themselves to just that area, Heybey said participants will have talks focused on the conflict, the consequences of crowdsourcing conflicts and what it means to do open source intelligence.

Professional military development in cyber looks much different than other traditional disciplines. AvengerCon was modeled after the famed DEF CON event and participants show up in casual dress wear, meaning no one is in uniform or saluting superiors.

“People know that when they’re going to AvengerCon they’ll be able to interact in an informal way without causing problems in your workspace next day or anything like that,” Maj. Neil Milchak, the lead organizer of last year’s conference, said. “Being able to bring people together in an informal environment and make sure they’re comfortable, that if you’re a junior person and there’s something interesting, you find somebody else doing something interesting, you’re not worried about is it proper for me to ask this person this question — or vice versa [if] I’m a senior leader and I want to ask the specialist expert on this one thing I’m interested in.”

Cyber folks must be constantly engaged in the latest tech and tradecraft to stay ahead of new technologies, tools and techniques that could be used. AvengerCon provides an environment for forces to gather in a friendly and informal way to share experiences that can translate into real operational outcomes and relationships, all led by junior soldiers who volunteer to run the event.

“They all get to come together and yeah, it’s unclassified, but you still get that technical melting pot and people able to bounce ideas off each other,” Heybey said. “You come away with a name of someone who clearly has interesting things to say about technical areas and you can reach out to them later.”

The volunteer and soldier-led nature of the confab is really what makes the event special, Heybey say.

“I think it’s a crucial part of the conference’s identity,” he said. “I also think it gives it an authenticity when you try to present it to the community at large. Just saying that it wasn’t a commander that ordered this event to happen. This group of people got together and decided that it was a good idea. We have backing from various senior leaders and there’s been participation, but the fact that it’s remained community gives it both authenticity and reassures us that it’s still useful, it’s doing something that’s helpful.”

Moreover, the organizers hope to foster an environment that can be welcoming to those new to both cyber and the military such as a second lieutenant fresh out of a basic officer leadership course or an enlisted person who gets their first orders to Cybercom.

“The specific theme or technical focus we pick every year, I don’t think, isn’t as important as getting people into the conference and opening their eyes to the wider community,” Heybey said. “We want AvengerCon to be that bridge into that wider community of if you don’t know where to start, here’s a friendly entry spot for you to go dig into exactly what people are doing on Twitter when they’re doing this public OSINT thing, or whatever else catches your interest.”

One of the big measures of success is inspiring others to take the initiative to present on a topic of interest and share their knowledge with the rest of the community.

“The other big thing we’re looking at folks to come away with is inspiration to explore new ideas and topics. And ideally, we’re looking to inspire them to the level that they want to become active participants in [the] community,” Milchak said. “I would say the biggest success story is that junior soldier or that junior civilian seeing something that they really want to latch on to and then submitting a talk. It’s really good talk or workshop or helping out with the event in the years to come. developing from that junior cyber professional into one of the experts in that community.” 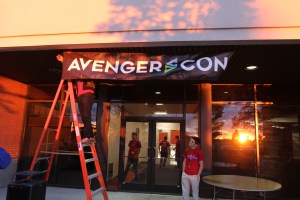