The agreement was established to further accelerate the adoption and scaling of its suite of AI-aligned technologies within MDA.

MDA is tasked with developing America’s next generation of missile defense interceptor systems — and massive data sets are what make it possible to capture such comprehensive views of possible threats.

For that initial order, C3 AI will provide an enterprise AI application to help agency officials make sense of and unify their datasets that span so many sources, accurately generate novel threat signatures much faster, and more.

The company plans to “equip the agency’s test programs with an AI application to plan, analyze, and execute Missile Defense System flight/ground test events, such as pre- and post-test efforts including hardware-in-the-loop system tests and post-flight reconstruction” for the second order awarded, according to the vendor.

That solution — which is planned to first be deployed to an Impact Level 6 (IL6) classified cloud environment — will be capable of integrating disparate flight and ground data into one federated model, and pave the way for AI-backed exploration of new learnings.

For its third task order for MDA under this agreement, C3 AI will optimize and automate facets to accelerate the agency’s ground-test process, and enable better ingestion and analysis of engineering data at a much bigger scale. 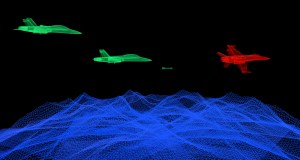