Despite releasing what a top official referred to as a “seminal document” for the Department of Defense’s new concept for joint all-domain command and control (JADC2), the proof will be in how systems associated with that effort are funded across the individual services. And according to the official leading the charge, there is a funding mechanism in place in the soon-to-be-released fiscal 2023 defense budget request to purchase the technologies and mechanisms needed to make the plan a reality.

“Yes, very clearly. We’ve already had placeholders,” Lt. Gen. Dennis Crall, who heads the Pentagon’s JADC2 efforts, told reporters Friday when asked if there will be funding recommendations reflected in the 2023 budget for that.

The fiscal blueprint will be released March 28, according to reporting from Bloomberg.

The joint all-domain command and control initiative seeks to more seamlessly connect sensors and shooters to allow for faster decision making on the battlefield. Deputy Defense Secretary Kathleen Hicks signed the implementation plan for the JADC2 strategy earlier this week.

However, the military services still have to get on board and fund the programs and efforts that support this larger push to connect systems and improve data flows to allow for decision advantage on the future battlefield.

“Even though … the [implementation] plan itself was recently signed, we’ve been in constant battle or other events with our leadership on where we saw this forming up,” Crall said. “It’s not as though it was just dropped in the environment and we’re now trying to take a look at this for the first time. We had a pretty strong understanding of where these would fall out. And so yes, we have a solid plan, I think, or at least a good recommendation maybe on how that’ll land for ’23.”

There has also been a partnership between the Joint Staff’s Joint Requirements Oversight Council and the deputy secretary of defense through the Deputy’s Management Action Group, a senior review panel, to try to ensure that funding is available to realize the vision for JADC2, Crall said.

Funding should never be put against something that doesn’t have a validated requirement, he added.

Despite ongoing efforts with the services to game-out concepts and technologies for JADC2, Crall said there are two specific areas that are getting a “disproportional amount of attention” upfront: DevSecOps and the mission partner environment.

On the DevSecOps front, Crall described getting the department onto a modern footing on par with how Fortune 500 companies do business. While not novel in the commercial world, this is a first for the DOD and thus a large undertaking.

First, he explained, the Pentagon is going to take a series of applications the military services have identified and create a secure application and toolkit to allow for real-time patching. In the current environment, patching protocol is problematic, he said.

Second, the department will take some of its most “misbehaving applications,” which Crall declined to identify, and put them in a redevelopment gauntlet to have them reformatted to allow for greater data sharing.

During the Afghanistan drawdown, the department found it difficult to share information in a timely manner. The goal now is to get applications to work properly and provide data to the people or organizations that need it.

Regarding the mission partner environment, which allows DOD and coalition partners to access information, Crall said there has been a lot of testing on data exchange, how data is stored and what security elements are best.

Officials are focusing on challenges with currently fielded systems.

“We’ve got at the Secret level and below a very wonky, problematic array right now with the way that we exchange data with our partners and it’s not sustainable,” Crall said. “It’s expensive, it doesn’t work well and almost every country has some level of bespoke configuration that makes it really hard to manage. We’re taking that on as to how do you take what you’ve got and put it in a repeatable, recognizable, affordable order.”

“Rather than creating all of that here in D.C., we’ve turned to our combatant commands who have shown progress and we are helping them organize this in the cross-functional team to see if we can replicate that as a standard,” he said. 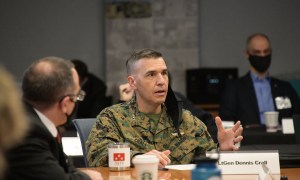