Air Force Lt. Gen. Mary O’Brien has been tapped for a key position on the Joint Staff where she will lead the U.S. military’s approach to Joint All-Domain Command and Control, the Pentagon announced Wednesday.

Known as the director for command, control, communication, and computers/cyber and chief information officer, J-6, this role has been extremely important over the recent past as the point person for the Pentagon’s emerging JADC2 efforts.

JADC2 is a new concept for the Department of Department articulating ideas for how the military services and other DOD components can better connect sensors and shooters and share data faster for better decision making in a more complex battlefield of the future.

Deputy Secretary of Defense Kathleen Hicks recently signed off on the implementation plan for the JADC2 strategy, which aims to provide the mechanisms for how the strategy, released in May of last year, will be achieved.

It was not immediately clear where the current J6, Marine Lt. Gen. Dennis Crall, will head or when O’Brien will take over.

O’Brien comes into the position after serving as the Air Force’s top intelligence and cyber officer in the office of the deputy chief of staff for intelligence, surveillance, reconnaissance and cyber effects operations. There, she was in charge of policy issues surrounding intelligence, cyber ops and electromagnetic spectrum ops. 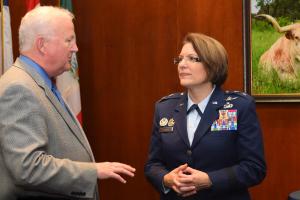