The Pentagon’s experimental satellite for positioning, navigation and timing will be used to conduct more than 100 experiments after it is launched next year, the commander of the Air Force Research Lab said Thursday.

The project has been designated a Vanguard program, making it a top science and technology priority for AFRL aimed at delivering game-changing capabilities for the U.S. military.

The Navigation Technology Satellite-3 (NTS-3) initiative comes at a time when GPS satellites, which the U.S. military, private sector and the average citizen depend on, are at risk of being jammed.

“We’re really excited to push the state of the art with over 100 experiments on this little [NTS-3] spacecraft and we’re looking at ways that we can solve warfighters’ problems in the contested environment,” Maj. Gen. Heather Pringle, commander of AFRL, told reporters at the Space Symposium in Colorado Springs.

She continued: “We know that the way of warfare has changed and we’re going to be having difficulties with, you know, jamming and have difficulties getting our position, navigation and timing signals to our warfighters. So, the way that we can look at new ways of addressing that on this satellite is really exciting for us whether it’s spot beaming or timing and navigation and all the antennas.”

The spacecraft, which is expected to remain in orbit for about a year, is slated to be incorporated into the Space Force’s USSF 106 launch mission, which is currently scheduled for late 2023, according to Pringle.

The NTS-3 experiments will involve not just the satellite but also ground equipment and terminals such as command and control stations and software-defined radios.

GPS satellites typically fly in medium-Earth orbit (MEO), but NTS-3 will be put into geostationary orbit (GEO) over the United States.

“What we can do with NTS-3 being in GEO is look at how can you use a constellation that is truly a hybrid architecture,” said Joanna Hinks, the deputy program manager. “You could use signals that are coming from both the traditional [spacecraft], the MEO satellites … as well as satellites that you could put in GEO and, you know, get the benefits there and really broadcast something that’s complementary.”

One of the benefits of GEO systems is they remain persistently in view of the same area of the Earth, she noted.

“You don’t need to worry about … you’ve only got one or two satellites and they’re going to be gone in a few hours [and] you won’t be able to see them. That’s one of the big things,” she said.

The Air Force Research Lab hopes to start laying the groundwork for how satellite users could have a constellation that is not limited to one orbit regime.

The concept that Hinks described is known as augmentation.

“People have looked at it over the years a little bit and we’re trying to take it to the next step,” she said.

Reprogrammable signals will be another major emphasis for the experiments.

AFRL wants to examine “what are some specific signals that we could broadcast with this capability. And also, you know, what does re-programmability look like?” Hinks said.

User equipment must be able to handle it, she noted.

The experiments will look at: “How do you tell your user equipment that you’re going to be broadcasting something new so that it can be ready to receive that?” she said. “And on the ground side … if we’re looking at the ability to be reprogrammable, the ground segment needs to be able to command that. So, we’re doing some experiments with our ground segments to understand what that looks like.”

Timekeeping will be another focus of the experimentation.

“We’re looking at doing automated anomaly detection and mitigation on-orbit, which just increases the resiliency so that we don’t have outages and our operators on the ground don’t have to deal with it if there’s an anomaly” with the clocks, she said.

Harris Corp. will integrate the NTS-3 using Northrop Grumman’s ESPAStar bus, and Parsons Corp. has developed a dedicated ground system for the experiments, according to AFRL.

Payload-to-bus integration is being completed now.

“Then we’ll be doing testing of the integrated system this summer. And then, at the same time, start to do a lot more of that risk reduction in terms of trying out our experiments … in a limited fashion on the ground, get initial baseline data and be ready for primetime next year,” Hinks said.

Program executive officers will be observing the results of the experiments.

Cordell DeLaPena, program executive officer for military communications and PNT at Space Systems Command, said integration studies will look at how acquisition officials can insert capabilities coming out of the demonstration into the ongoing production of satcom systems.

“The acquirers are here to think about and learn how they could incorporate this technology into their own programs,” Pringle said. “We want our PEOs with us at every step of the way so that they know where it does work and where it doesn’t.” 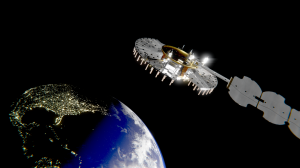