Funding for basic research into microelectronics, directed energy, hypersonics, and other science and technology projects would see a major boost in the Pentagon’s budget request for fiscal 2023, a senior official revealed Wednesday.

In the request, DOD science and technology funding would increase 12% to about $16.5 billion, Undersecretary of Defense for Research and Engineering Heidi Shyu noted during a webinar hosted by the National Defense Industrial Association.

The portion of the S&T budget overseen by Shyu’s office would rise 21%.

S&T — which includes funding categories 6.1 (basic research), 6.2 (applied research) and 6.3 (advanced technology development) — is seen as a critical component of the Department of Defense’s research, development, test and evaluation budget.

“This portion of DOD RDT&E is often singled out for attention by analysts, as it is seen as the pool of knowledge necessary for the development of future military systems. In contrast, 6.4, 6.5, and 6.7 funds are focused on the application of existing scientific and technical knowledge to meet current or near-term operational needs,” according to a Congressional Research Service primer.

DOD-wide basic research funding would grow 4% to about $2.4 billion in 2023, while the portion overseen by Shyu’s office would see a 23% boost. About 14% of the total S&T budget would go toward basic research.

“Critical technology areas” that would get a funding boost in that budget category include microelectronics, which would see the biggest increase in total investment, going from $655 million in 2022 to $989 million in 2023. This technology would account for 40.7% of the basic research budget, according to Shyu’s slide presentation.

Microelectronics are key components of DOD systems. However, much of the supply comes from overseas and Pentagon officials are worried about vulnerabilities in the supply chain.

“Those are kind of the … big muscle movements” in terms of investment increases, Shyu said.

5G and “FutureG” communications technology, another top priority, would see a funding cut, from $412 million in 2022 to $299 million in 2023, although it would still receive the second-largest amount of funding among the critical technology areas, and account for 12.3% of the basic research budget.

Microelectronics and 5G/FutureG combined would account for more than half of the basic research budget, Shyu noted.

Hypersonics and directed energy — the next top priorities — would account for 9.7% and 9.3% of the basic research budget, respectively.

Rounding out the list of the top 10 critical technology categories in terms of basic research funding requested for 2023 are trusted AI/autonomy, $96 million, and quantum science, $67 million. 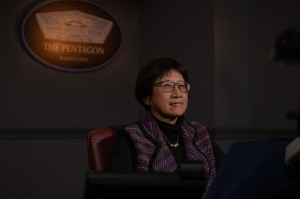