The Marine Corps plans to send some of its tech savvy troops to the Army’s Software Factory in Austin, Texas, to hone their coding skills.

The move is part of the Corps’ plan to develop a more “AI aware workforce,” according to Brig. Gen. Joseph Matos, director of information, command, control, communications and computers (IC4).

The software factory, located near Army Futures Command headquarters, was stood up last year in one of the nation’s top technology hubs to help the Army train and build up its organic software talent. Unlike some of the U.S. military’s other software factories, it is primarily soldier led.

The organization has “done a great job developing a coding capability,” Matos said this week at the Pentagon’s annual Digital and AI Symposium.

“We are now partnering with them. We’re on the very cusp of doing a joint venture with them where we embed,” he said. “Up to about 36 Marines a year will go through that process, stay down there for a couple years after they finish the training, developing coding” tools.

Meanwhile, the Corps is sending personnel to the Naval Postgraduate School (NPS) where they are taking courses in operations research and other areas of study that could help the service integrate AI across its enterprise.

“As we develop algorithms and develop the coding capabilities within Python or whatever, those Marines [that go through the Army Software Factory] become kind of the seed corn who help … the graduates out of the NPS to really implement this” vision for expanding the use of artificial intelligence, Matos said.

The software factory is a pilot program that’s going to run at least five years, Assistant Secretary of the Army for Acquisition, Logistics and Technology Douglas Bush told reporters in February.

“The cadres moving through there are learning some very valuable skills about how to do software,” he said. “I’m excited at the potential, for example, to have more people in my [program executive offices] who know about software and how to write it — helping advise the people trying to buy it. I’m all for that … I’m optimistic that it could be a way for us to spread more talent across the Army in many places — my area of the Army, but also others.” 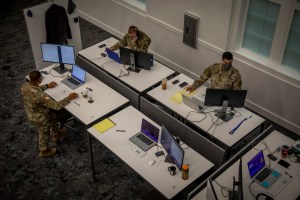