The Marine Corps on Wednesday released its latest doctrinal publication focused on information, putting it on a level footing with other aspects of warfighting.

Marine Corps Doctrinal Publication-8, Information, aims to describe the purpose and mechanics of using information as a warfighting tool for the entire service.

“Information is key to gaining advantage in all domains, whether on the battlefield or during day-to-day @USMC ops in competition,” Gen. David Berger, commandant of the Marine Corps, tweeted Tuesday before the document’s release. “It’s especially critical when our Marines need to sense and make sense of the operating environment.”

The document highlights the new strategic environment that Marines and the rest of the joint force find themselves in.

The document is a product of the service’s force design efforts, Lt. Gen. Matthew Glavy, deputy commandant for information, told reporters Tuesday ahead of the release.

The modernization and tweaks articulated in the force design updates, initiated by the commandant, are the Corps’ response to the National Defense Strategy, Glavy said.

The Corps, and the Department of Defense writ large, are concerned about adversaries’ efforts to constantly contest or undermine U.S. interests below the threshold of armed conflict — an area of competition often referred to as the gray zone. The new doctrine officially recognizes that Marines will continuously have to deal with the spectrum of conflict, acknowledging a continuum as opposed to the traditional binary approach of war and peace the United States has historically taken.

Glavy said overall, this isn’t a new approach for the Marine Corps as it has sought to posture itself as the U.S. military’s “stand-in force” that is constantly inside what it refers to as the enemy’s weapons engagement zone.

“I think it’s a natural occurrence for the Marine Corps and our forward-deployed state to be in this continuum,” Glavy said. “I don’t think a lot of that has changed as the Marine Corps, roughly 30,000 Marines forward deployed, [is] interacting through multiple combatant commands. Certainly, the Indo-Pacific region has been a focal point for us. Approximately 20,000 Marines forward deployed there, interacting … with our partners, our allies, the joint force, the intelligence community. It’s a natural byproduct as we execute daily to formalize what that means.”

Glavy noted that the doctrine is related to a key pillar of the National Defense Strategy: campaigning.

The new doctrine will help the Corps do “a better job of grading our work, driving to outcomes that are measurable that we can feed on for what should happen next,” he said. “This idea of campaigning is very much a part of the National Defense Strategy and very much what MCDP-8 will try to attempt to compile that type of reflectivity on how are we doing from a campaigning aspect.”

The doctrine took lessons learned from the war in Ukraine to provide useful vignettes for Marines to draw upon.

“The commandant specifically asked us to use current examples, if possible, and then we can leverage the vignette as an illustration to Marines to help them interpret the environment and see how to tangibly apply the ideas that are communicated within the document,” Eric Schaner, senior information strategy and policy analyst within the office of the deputy commandant for information and primary author of MCDP-8, told reporters.

The doctrine sought to address the “information afterthought problem,” where information is sprinkled onto battle plans at the conclusion of planning rather than integrated from the start, he noted.

“By elevating information as a warfighting function, we’re making it a prominent consideration for commanders in their planning process from the beginning, so that we don’t have a situation where [we are] developing our plan and then bringing in our information professionals, like our [information operations] folks, at the tail end to try and resolve that issue,” Schaner said. “Elevate the idea of information in the minds of commanders presented through a warfighting function, so that we can consider all aspects of the battlespace and bake it into our plan from the beginning.”

Glavy said the doctrine is expected to be adjusted over time given how dynamic the information space is.

“Maybe every two or three years we’re updating this thing. Something’s going to change, technology is going to change, certain aspects could change,” he said. “Our focus was to get at the foundational aspect of information to endure change, but I think we’d be naive to think that we’re going to nail it” completely. 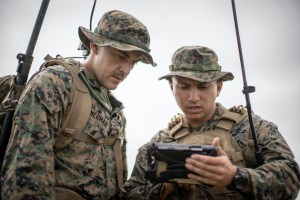