The Army’s Optionally Manned Fighting Vehicle (OMFV) program will soon be transitioning to its detailed design and prototype phases, and the service has issued a new solicitation for the effort.

The OMFV is a critical element of the Army’s next-generation combat vehicles portfolio and a top modernization priority as the service pursues new technologies such as unmanned systems and data-sharing capabilities for high-end combat against advanced adversaries.

A request for proposals for phases 3 and 4 of the program was released July 1.

“The purpose of Phase 3 is to conduct detailed design activities to mature OMFV designs and will culminate in a critical design review,” according to the RFP.

Phase 4, which is slated to immediately follow Phase 3, will include building and testing prototypes.

“The purpose of Phase 4 is to verify performance against the performance specification. Late in this phase, a Limited User Test will be conducted. In addition to the delivery of prototypes, the Contractor will develop, mature, and deliver a virtual prototype of their design,” the RFP said.

The Army plans to conduct a full and open competition using “Best Value Source Selection” procedures and plans to award of up to three contracts in the third quarter of fiscal 2023, with a 54-month performance period for the two phases.

Vendors will be required to provide up to 11 prototype vehicles as well as two ballistic hulls and turrets, armor coupons, digital model twins, and data.

Proposals are due Nov. 1.

The OMFV is expected to replace the Bradley infantry fighting vehicle. It will be designed to “maneuver through the enemy’s security zone as part of a combined arms team for the purpose of creating an advantageous position, relative to the enemy, and providing protection and direct fire lethality while manned or remotely operated. In the close fight, the OMFV enables the ability of dismounted elements to maneuver by detecting and destroying targets at a range beyond the enemy’s capability,” according to the RFP.

The system “will bring a transformational change to how our ABCTs [armored brigade combat teams] fight in the future, bringing more lethality to the battlefield and reducing risk for our most valuable asset, our fighting women and men,” Maj. Gen. Ross Coffman, director of the Army’s next-generation combat vehicles cross-functional team, said in a statement.

In addition to providing firepower and reducing risks to soldiers, the vehicle is expected to serve as a critical node in the Army’s data networks at the platoon level by “rapidly generating, receiving, and passing information to dismounted elements, other vehicles, and command nodes.” That includes target acquisition data and other situational awareness capabilities.

Notably, the platform will be the service’s first ground combat vehicle designed using modern digital engineering tools and techniques, according to the Army.

Contractors will “develop the OMFV using Models Based System Engineering (MBSE) and within the digital domain to communicate the design’s maturity and evolution via a series of interconnected digital models throughout the program lifecycle,” the RFP said.

The program is also pursuing a modular open systems approach (MOSA) to facilitate technology updates to the platform.

“As technology and software evolves, the Army’s open architecture standard allows the OMFV to modernize rapidly at a reduced cost. This will also offer more opportunities for increased industry competition and innovation over the OMFV’s lifecycle,” according to the RFP.

Following these design and prototyping phases, the Army plans to hold a limited competition for phase 5 and down-select to one vendor for low-rate initial production near the end of fiscal 2027, with first unit equipped slated for fiscal 2029, according to an Army press release.

The service is still finalizing the selection criteria for phase 5. However, it is currently exploring “performance, MOSA [modular open systems architecture] compliance, intellectual property (IP) rights provided, AUMP [average unit manufacturing price], end to end digital thread, and manufacturability,” according to the RFP for phases 3 and 4.

The aim of the program is to produce “a transformational infantry fighting vehicle that will dominate maneuver in multi-domain operations,” Brig. Gen. Glenn Dean, program executive officer for ground combat systems, said in a statement. 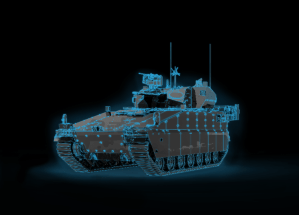