The Pentagon’s research and engineering directorate is investigating manufacturing challenges that are affecting the defense industrial base and hindering its ability to deploy capabilities aligned with the technology areas that have been deemed most critical to ensuring national security in the years ahead.

But the Pentagon is dependent on industry to help bring new capabilities to fruition.

“All these emerging technologies, though, can’t move forward if we can’t build it, we can’t buy it, we can’t use it. So, we care a lot about the technology industrial base. Understanding how we can invest in these emerging technologies and more rapidly move them forward into the industrial base is significantly important for us now and in the future,” the DOD’s Deputy Chief Technology Officer for Science and Technology Barbara McQuiston said Wednesday at a virtual event hosted by FCW. “To do that, we must be able to de-risk manufacturability — and in some cases scale up the manufacturing, or in other cases scale out what we need to do.”

McQuiston, who reports to Shyu, noted that she and her colleagues are funding studies and gathering information about “the health, maturity and stability of the defense industrial base” along all of those 14 critical technology areas.

While she didn’t provide much further details, McQuiston said these studies “highlight some of the needs for modern warfare” including hypersonics. Officials have already “looked at the industrial base challenges in engineering, manufacturing and testing,” she noted.

In collaboration with partners at the National Defense Industry Association, the team has worked to identify and address risks, issues and opportunities to reduce the time and cost it takes for the military to field and mature advanced capabilities.

“Every time we remove a speed bump, the industrial base is stronger and resilient and can work more quickly,” McQuiston said.

The DOD has manufacturing innovation institutes that support this work. The hubs are designed to help overcome manufacturability challenges for specific technology ecosystems. McQuiston said each is like a little community made up of professionals from the government, universities, startups, larger companies and more. Since the institutes’ launch over the last decade, the Pentagon has created a network of more than 1,500 organizational partners and committed almost $1.2 billion to support the hubs, McQuiston said.

These institutes are “advancing research and development to promote American innovation,” growing the nation’s manufacturing pipeline for defense technologies, and providing education, workforce development and training in manufacturing realms where manufacturability gaps exist, she added.

In collaboration with Boeing, the manufacturing institute that focuses on hybrid electronics — NextFlex — assessed funding, skills and talent issues hindering the development of the workforce of the future.

“With public-private investment being able to move this forward, we were able to expand education in 14 states, 35 different community colleges, 43 industrial partners and 7,240 participants to date,” McQuiston said. “And we’re looking to expand that over the next few years.”

Officials from NextFlex additionally put together a physiological status-monitoring capability for detecting oxygen, volatile organics, and humidity levels to improve the health and safety of Air Force personnel in real-time.

“They actually looked at challenges for people that go into the fuel tanks to do repairs, so that they had continuous monitoring of their safety vitals as well as all the volatile materials that could be in the environment to make sure that people could be safe in the work that they have,” McQuiston said.

Another manufacturing innovation institute, which is focused on making integrated photonics — used for sensing or manipulating light — used Cares Act funding to develop an optical chip on a disposable card that could detect exposure for multiple viruses including COVID-19 within a minute, from a single drop of blood.

“AIM Photonics also established the first test-and-assembly packaging for state-of-the-art 3 millimeters-based silicon wafers to help reduce costs and accelerate the speed of development, again, to accelerate prototyping, and transition and be able to concentrate on some of the important manufacturability challenges,” McQuiston said.

An official with AIM Photonics later clarified to FedScoop that the test-and-assembly packaging is based on 300 millimeter silicon wafers.

She also noted the recent passage of the CHIPS and Science Act, which President Biden signed into law on Tuesday. Aimed at revitalizing domestic capabilities to produce microelectronics, the legislation provides a roughly $52 billion investment and incentives to boost semiconductor manufacturing in the U.S., particularly as the world grapples with a chips shortage exacerbated by the pandemic.

“It’s really key to everything around us and our day-to-day dependency,” McQuiston said.

Many provisions in the recently passed law are also aimed at bolstering the nation’s science and research infrastructure.

McQuiston noted that it includes a large investment in “a national research and development center, advanced packaging manufacturing program, and up to three manufacturing USA institutes for semiconductor-related manufacturing.”

The legislation also provides $2 billion over five years for microelectronics. Government officials intend for it to generate a new national network of onshore prototyping and laboratory-to-fabrication transitioning of semiconductor technologies — including those needed by the DOD.

“As we move these technologies forward, they can move our own mission forward,” McQuiston said. 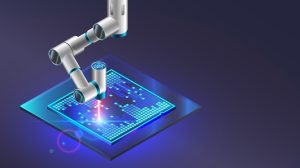