The Office of the Secretary of Defense is planning to exert more influence in guiding the military services’ Joint All-Domain Command and Control efforts. How exactly that plays out could determine the fate of the Pentagon’s construct for how wars of the future will be fought and won.

The departments of the Air Force, Army and Navy each have separate initiatives that are expected to contribute to JADC2, which aims to better connect the military’s disparate sensors, shooters and networks to improve decision-making and warfighting effectiveness. For the Army it’s Project Convergence, for the Navy and Marine Corps it’s Project Overmatch, and for the Air and Space Forces it’s the Advanced Battle Management System (ABMS).

At stake are billions of dollars in planned investments and the lives of troops who will rely on the underlying technology — and its interoperability — to fight and prevail in high-end combat.

Last month during a multi-stop trip focused on new defense-related tech, Hicks acknowledged that each of the military services is paving the way for JADC2 in notable ways individually — but pointed to a lack of coordination at the enterprise-wide level that must be addressed in the near term.

“Neither the secretary nor I are satisfied with the — where we are in the department on advanced command and control,” she told reporters traveling with her. “Every day in the department you can find examples where the speed and quality of decision-making [at the] tactical level, operational level, up at the strategic level, can be vastly improved and create that edge that we need for the future. A lot of good work going on throughout the department [but] what I’m really focused on right now is taking that … good work that’s going on and scaling it to the enterprise level.”

The Pentagon has a cross-functional team working on JADC2 issues. However, a defense official close to Hicks confirmed to DefenseScoop that the deputy secretary sees the need for “additional, high-level oversight for JADC2 coordination.”

One of Hicks’ predecessors, former Deputy Defense Secretary Robert Work, isn’t surprised that the Office of the Secretary of Defense is looking to wield more influence over JADC2.

“OSD taking more of an oversight role was inevitable. Up to this point, all of the work has been disaggregated among the military departments … And there’s no way that you’re ever going to get a truly interoperable joint system unless you have some type of guiding control that sets protocol standards, communication standards, things like that,” Work said in an interview with DefenseScoop. “So, I’m not surprised that Deputy [Secretary] Hicks has said, ‘Hey, I want to have more [oversight] now.’”

There are different ways that OSD leadership could exert more control over JADC2, he noted.

One idea that has been floated is setting up a joint program office. The Pentagon has taken that step for other high-priority initiatives that cut across the services, such as the F-35 joint strike fighter, which to date is the Defense Department’s largest acquisition program. Different variants of the F-35 are fielded by the Air Force, Navy and Marine Corps as well as international allies and partners.

“You could have a joint program office like we have with the F-35,” Work said. “That would be a pretty big institutional lift, you know. You’d have to grab people from all of the departments for manning it. You’d have to find and get a three-star somebody to run it. So that would be a pretty big lift, but that is an option. And it just depends upon how much oversight Deputy [Secretary] Hicks wants to have.”

Assistant Secretary of the Army for Acquisition, Logistics and Technology Doug Bush cited the Pentagon’s Joint Counter-small Unmanned Aircraft Systems Office as an example of a model that could work for JADC2.

“We have a counter-UAS office. It’s a joint office that actually helps prioritize our investments from a joint perspective,” he said in June at a conference hosted by the National Defense Industrial Association. “That kind of organizing body there could be useful in terms of making sure [JADC2] requirements are actually set and prioritized to get into the services.”

The defense official close to Hicks said the deputy secretary agrees with the premise of Bush’s suggestion, though they stopped short of saying Hicks wants to set up an official joint program office.

Work, who served as the Pentagon’s No. 2 during the Obama administration, said the “easiest lift” in terms of adding institutional oversight at the OSD level would be for Hicks to leverage the Deputy’s Management Action Group (DMAG), which is led by the deputy secretary and includes officials from across the department.

Pentagon leaders need to ensure that someone in the Defense Department sets the standards for the JADC2 information and communications backbone so that systems and technologies can be interoperable inside the network, he noted.

“I think in this case, OSD has got to exert some pretty strong oversight,” he added. “If you’re building a joint command and control network, you have to be absolutely sure that everything that you are procuring in the department — be it a communications device or a sensor or any type of satellite communications pathway — everything has to sync up. So, you have to have someone who establishes standards, and then someone who oversees them and cracks the whip if someone’s developing something that isn’t consistent with the standards.”

Pentagon officials have indicated that the new Chief Digital and Artificial Intelligence Office (CDAO), which is part of OSD, will play a key role in implementing JADC2.

Capabilities like AI, cloud and big data analytics will be critical underlying technologies for Joint All-Doman Command and Control.

A “big piece of the problem was the lack of a technical architect, and so we created the CDAO and … they’re going to be really focused on creating that integration layer at the software level,” Hicks told reporters during her recent trip.

Air Force Secretary Frank Kendall, who previously served as the top acquisition official in the Office of the Secretary of Defense during the Obama administration, said there have been “some pretty good informal interactions” between the services on JADC2, but “it’s not enough.”

More involvement is needed at the OSD level, in Kendall’s view.

“I’ve had a couple of conversations with the deputy secretary about this. And my observation to her was that … while the Joint Staff was producing documents that were kind of doctrinal and strategic, what was also needed were some technical management on the system engineering architecture definition perspective, and some discipline to get the services wired together,” he said Aug. 30 at the Department of the Air Force Information Technology and Cyberpower (DAFITC) conference in Montgomery, Alabama.

“So, the deputy (Hicks) has asked the new Chief Data and AI Officer (Craig Martell) … to basically pull all this together and help organize it,” Kendall continued. “Hopefully he’ll be able to help pull it together.”

Kendall added that he expects Undersecretary of Defense for Acquisition and Sustainment William LaPlante and CIO John Sherman to also have a role in that.

The CDAO did not comment on Kendall’s remarks. Another Defense Department official said Hicks had not issued any new memos or directives in recent weeks regarding CDAO’s role in JADC2 coordination.

Former Deputy Secretary Work said the Joint Staff and the Joint Requirements Oversight Council could also have a role in setting standards and making sure everyone is following guidance.

Executing on Joint All-Domain Command and Control will be no easy feat, Work noted.

“An important part of the JADC2 network — and what makes it so different than legacy battle networks — is artificial intelligence and AI-enabled autonomy is going to be inserted in the network. And it’s going to help say, ‘OK, the information is coming in … we need to send this information out to all of the people who need it, but we don’t want to push all the information to every single person in the net — we just want to push the stuff that the operator or the commander needs.’ And that will all be done generally through automation and artificial intelligence,” he explained.

This is an example of “algorithmic warfare” that Pentagon officials expect to see in future conflicts between high-tech militaries.

“That’s what’s making this so tricky. It’s not just communications. It’s putting in AI and AI-enabled autonomy in the whole network. That’s gonna be what we have to do a lot of experimentation on. We’ve never done something like this before. And it’s gonna be a big challenge,” Work said. “This is a very bold vision and it’s going to be technically challenging, without question.”

Work has been a strong proponent of using new technologies like artificial intelligence, autonomy and unmanned systems to gain an advantage on the battlefield, having been an architect of the Pentagon’s “third offset” strategy during the Obama administration. Although the term has fallen into disuse, its core tenets are part of the JADC2 concept.

The Pentagon’s former No. 2 said Operation Desert Storm during the Gulf War in the 1990s showed how a lack of interoperability can cause problems.

However, JADC2 is “infinitely more complicated” than the networks that existed during Desert Storm, he noted.

“It’s very technically challenging. We’ve got a long way to go before we can get there. And we’re not sure if we can really swing a giant battle network like this. You know, we can do all the analysis, but putting all the pieces together is going to be tough,” Work said. “That’s why I think Deputy Secretary Hicks said [she wants] to have more oversight, [she wants] to make sure that we don’t make mistakes that we’re going to regret later.” 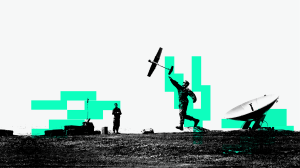 OSD moving to corral the military services for JADC2