The Army hopes that its Project Convergence experimentation will garner a new way for joint task force commanders to be able to assign targets based on data being fed by sensors across all the services.

This is the vision for the Pentagon’s new way of war known as Joint All-Domain Command and Control (JADC2), where sensors, shooters and networks will be better connected to allow warfighters to make smarter and faster decisions.

Project Convergence, the Army’s contribution to JADC2, in the coming weeks will conduct its next series of experiments to demonstrate the interoperability of not just Army systems, but also joint and international partner systems. It will test how to integrate everything for a joint commander to allocate operationally.

However, data from sensors can’t always be passed to shooters and easily sanitized for decision-making, officials say.

“One of the things that we’ve learned, especially over the last year … is you can’t just go directly from a sensor to a shooter in all cases because there’s other indicators and data that may be required to be integrated into that decision,” Brig. Gen. Guy Jones, deputy director of the Futures and Concepts Center, said Monday during a presentation at the Association of the United States Army’s annual convention in Washington.

In a future converged, joint fashion of warfighting, data will need to flow through a commander to help them assign resources and tasks.

“It all is going to go to the [joint task force] commander, who then through an automated way, based off his priorities, where he’s positioned his forces, will be able to then pass through subordinate C2 nodes to their access of their effectors,” Jones said. “Effectors” is a term that Defense Department officials sometimes use to refer to weapons or other tools that create an effect.

However, unlike some of the simplistic JADC2 descriptive vignettes that have been provided in the past where one service sensor will pass targeting data for another service to use to carry out an attack, Jones said Project Convergence will test how a commander assigns those roles.

“But we’re not going to just try with one that says, ‘Okay, we got this sensing … from a processor in the Air Force and we’re going to try to get the Army to shoot it.’ What we want to get to is we’re going to try each one of them,” Jones said. “What we want to get to is as it gets to the JTF commander, through an automated process, he can figure out and say, ‘Hey, I’m going to give these four targets to the Air Force, these nine targets the Marines and these five to the Army — at the speed of machine.’ That is the success that we need on the 2030 battlefield and beyond to enable the JTF commander and the [combatant command] commanders to do what the nation has asked them to do.”

Jones told DefenseScoop following his presentation that the Army is working closely with the Department of Defense and the JADC2 cross-functional team to work the joint portion of Project Convergence.

“One of our primary pieces that we’re connected to is the JADC2 CFT, because what we’re doing has to be in parallel with them or we’re for naught,” Jones said. “You bring in all that joint three-stars … We go, ‘Okay, all right, so let’s recalibrate, let’s readjust.’ And what it’s able to do is also help like the JADC2 CFT instead of having left and right limits here for the joint forces, because we’ll be able to collectively do it, bring those links in. Because that’s really what we’re trying to define is what is the standard for data? What’s the standard for systems that we have to define?”

Jones also noted that staff have briefed Undersecretary of Defense for Research and Engineering Heidi Shyu on their efforts and are even working with the Rapid Defense Experimentation Reserve program (RDER), which seeks to speed delivery of capability to combatant commands.

Some of the things coming out of Project Convergence are in the first piece of the RDER program, Jones said. 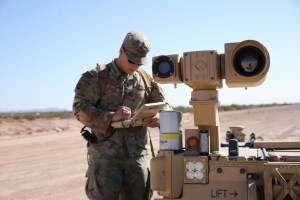