RCVs are a key component of the Army’s next-generation combat vehicle portfolio as the service pushes to acquire new unmanned systems. Officials are working on generating requirements for lighter variants of the platforms known as RCV-Light.

“That’ll be within the next three months for sure,” Brig. Gen. Geoff Norman, director of the Next-Generation Combat Vehicles Cross-Functional Team, said about the upcoming release of the draft solicitation during a meeting with reporters at the Association of the United States Army’s annual convention in Washington. “We want to finish learning from Project Convergence and make sure that that has informed the requirement before an RFP goes on the streets.”

Project Convergence is a series of experiments that are informing the Army’s contribution to Joint All-Domain Command and Control (JADC2) and the acquisition of new capabilities. The latest iteration will be conducted in the coming weeks.

“We’re waiting for the outcome of PC because we think that’s going to give us enough of a requirements definition to go into a rapid prototyping execution. So we’re gonna go out and compete for a platform that will be the initial sort of planned fielded prototype that will be the baseline for capability that we build for the future,” Maj. Gen. Glenn Dean, program executive office for ground combat systems, told reporters at the conference.

“We have a software program running in parallel that will take the outputs of the subsequent experimentation to drive our investment in autonomy behaviors and continue to evolve that base platform that we get to, with the goal of getting an initial robotic capability in the hands of troops on a permanent basis as rapidly as we can,” Dean said.

Army officials think they can probably have the rapid prototype final selection in the hands of soldiers in the 2025 timeframe for initial testing. However, systems could come earlier or later depending on what requirements tradeoffs are made, he noted.

Meanwhile, the Army continues to experiment with existing robotic platforms, surrogate systems and control vehicles as part of a campaign of learning.

During Project Convergence 22, soldiers from 1st Squadron, 7th Cavalry will be executing an “expanded maneuver scenario.”

“They’ll have robotic combat vehicles, they’ll have other technologies out there for us to continue to learn about the needs of our units and soldiers,” Norman said.

Later in the second and third quarters of fiscal 2023, soldiers from the unit will participate in a pilot initiative for Army Forces Command.

“They’ll have the control vehicles, they’ll have RCV-lights to continue to put through their paces so we can continue to gain those operational insights … about what we need for robotic combat vehicles moving forward,” he said.

Officials have already gleaned important insights and received troops’ feedback from Soldier Operational Experiment No. 2 this past summer at Fort Hood, Texas, including about the performance of autonomy tech, human-machine interfaces, vehicle ruggedness, and communications needs.

“What we’ve done is we’ve taken all of that feedback, and over the course of this year we will continue to integrate new capabilities or change behaviors, change different components on the autonomy software and some of the hardware as well,” Mike Cadieux, director of the Ground Vehicle Systems Center, told reporters.

The Army has a testbed called Project Origin that will help put new technology through its paces. Officials will use that to do a series of smaller experiments with soldiers and continue that evolution of getting additional feedback based on new capabilities that are developed, and repeating that process, he said.

These efforts will support requirements generation and help shape the program of record, he noted.

Soldiers liked the autonomy technology’s ability to detect enemy vehicles and “anomalies” in the environment, as well as the robotic platforms’ ability to move and go from Point A to Point B with very little human intervention, according to Norman. However, troops were less enthusiastic about relying on the systems for more complex tasks like target identification and intricate maneuver warfare operations.

“I think that soldiers really like the idea of a robot making contact with the enemy first. Having a system that can take that first shot rather than having them be the person that takes the first shot is really powerful. But they need that robot to be reliable, they need to be able to trust that where they tell it to go, it can go there without them having to intervene. They need it to be reliable in executing its mission once it gets there. So what we’re learning from these experiments is what do we need to ask the robots to do so we don’t overburden the robot by having it try to do all things for all people,” he said.

Autonomy is maturing quickly, Norman said. “But what we have to do is prioritize which autonomous capabilities we need to put at the top of the list [of requirements] and then which ones can be lower down either because they’re more complicated, or because they’re not a function that soldiers need right away. And so I think the autonomy is moving really quickly, and it’s just a matter of us prioritizing which functionalities we need first.”

Networks will also be critical for RCVs. That consideration has been part of the ongoing campaign of learning.

The service is also pondering whether it wants RCVs to have an amphibious capability.

“It’s something that we’re taking a hard look at. I mean, certainly, we would love for it to be able to swim … but it’s a hard requirement to meet and still meet the other demands of size, weight and affordability. So I think we have to be really pragmatic about what we’re asking the platform to do,” Norman said.

“Swim — while an absolutely valuable operational capability — may not be functional or affordable for all the systems,” he added. “The [Soldier Operational Experiment] and other experiments are helping us to understand, does every RCV need to be able to swim? Do they need to be able to swim all the time? Or is there something — some other approach we can take in order for some RCVs to be able to do that at the right time?” 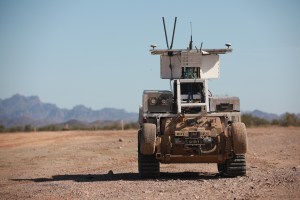