The previous MDR, release by the Trump administration in 2019, expanded the scope of these reports — which are typically released every few years — by focusing on emerging capabilities such as hypersonic weapons, but it made no mention of UAS. Since then, the Pentagon and other federal agencies have grown increasingly concerned about adversaries’ drones.

“Since the release of the last MDR in 2019, missile-related threats have rapidly expanded in quantity, diversity, and sophistication. U.S. national security interests are increasingly at risk from wide-ranging missile arsenals that include … lower-tier threats such as Uncrewed Aircraft Systems (UAS),” the unclassified version of the Biden administration’s MDR, released on Thursday, notes.

New threats such as small drones are complicating the traditional roles of air-and-missile capabilities, according to the document.

“UAS are an inexpensive, accessible, flexible, expendable, and plausibly deniable way to carry out armed attacks and project outsized power over a variety of domains. Accelerating technology trends continue to transform applications of UAS, making them increasingly capable platforms in the hands of both state and non-state actors,” the report says.

Drones can be about as lethal as cruise missiles, are able to be launched from a wide range of locations, and can be very difficult to detect, the study notes, adding that these types of platforms are “an increasingly preferred method to carry out tactical-level strikes.”

Unmanned aerial systems come in a variety of shapes, sizes and capabilities, to include small hobbyist-type drones that are available on the commercial market all the way up to large military-grade platforms.

Some are used simply for intelligence, surveillance and reconnaissance, while others launch missiles against opposing forces. The Pentagon has grown increasingly concerned about loitering munitions — also known as kamikaze drones, suicide drones, or one-way UAS — which are designed to fly around until they find a target of opportunity to crash into and destroy.

“Adversaries also are utilizing multiple types of missile salvos — such as one-way attack UAS in combination with rockets — in an effort to defeat missile defense systems. UAS usage will likely expand and continue to pose a threat to U.S. personnel overseas, Allies and partners, and potentially to the U.S. homeland,” the MDR warns.

Kamikaze drones — as well as other UAS — have been employed during the ongoing Ukraine-Russia war, as well as in other regions such as the Middle East.

Nation-states such as China, Russia, Iran and possess such systems and are developing more.

During a press briefing at the Pentagon, Secretary of Defense Lloyd Austin noted that Iran has been exporting drones to Russia, which he said Moscow is using to “terrorize Ukrainian civilians.”

“In addition to missile threats, U.S. forces, Allies and partners also face the proliferation of lower-tier threats (e.g., rockets, armed UAS, etc.) as adversaries seek to take advantage of these relatively inexpensive, flexible, and expendable systems while exploiting inherent difficulties with attribution and its implications for deterrence,” the report notes.

In the future, Defense Department officials are concerned that adversaries could employ drone swarms against U.S. forces or other targets, although the MDR did not explicitly mention UAS swarms.

In total, the MDR references “UAS” about 20 times throughout the document.

To tackle these and other aerial threats such as ballistic missiles, cruise missiles and hypersonics, the United States needs integrated air-and-missile defense (IAMD) systems, according to Pentagon officials.

“One area of importance related to IAMD is the increasing challenge of counter-UAS (C-UAS). UAS are an inexpensive, flexible and plausibly deniable way for adversaries endeavoring to carry out tactical-level attacks below the threshold for major response, making them an increasingly preferred capability for state and non-state actors alike,” the MDR says, noting that drone capabilities are increasing in variety, quality and quantity.

“The homeland and regionally forward deployed forces require the fielding of technical and integrated C-UAS solutions with cross-DoD and interagency synchronization to ensure they can meet the range of threats and appropriately hedge against future advancements. Within the homeland, protecting the population from UAS threats is a combined interagency mission,” the report adds.

A senior defense official who briefed reporters on the MDR on condition of anonymity, said emerging “lower-tier threats” like unmanned aircraft systems pose “an expanding and accelerating risk” to the homeland, U.S. forces abroad and America’s allies and partners.

In a section of the MDR titled “Future Technologies,” the document highlights the need for advanced networks of sensors, weapons and command-and-control capabilities.

“The ability to operate these sensors through common, joint and combined all-domain integrated and survivable C2 networks and architectures is paramount. The United States will continue to leverage industry, academia, government, and allied and partner solutions to augment existing Department of Defense capabilities and foster rapid future capability employment,” the report states.

Future capabilities must also be “more mobile, flexible, survivable, and affordable, and emphasize disaggregation, dispersal, and maneuver to mitigate the threat from adversary missiles,” the MDR notes. 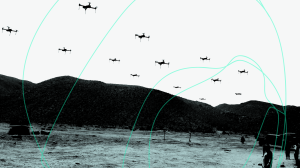