The People’s Liberation Army of China sees artificial intelligence as a key enabler of psychological warfare that could be employed against the U.S. and other nations during “cognitive domain operations,” the Defense Department noted in its latest report on China’s military power.

The PLA has been honing its cognitive domain operations (CDO) concept, which calls for upgrading psy-ops for the modern information environment with the help of AI and other emerging technologies, according to the study.

“The goal of CDO is to achieve what the PLA refers to as ‘mind dominance,’ defined as the use of propaganda as a weapon to influence public opinion to effect change in a nation’s social system — likely to create an environment favorable to China and reduce civilian and military resistance to PLA actions. PLA researchers have stated that the victory of the cognitive narrative may yield greater strategic benefits than firepower destruction, force control, and siege, and that effects of CDO can last long after the conflict has concluded,” the document said.

Cognitive domain operations would fall under the People’s Liberation Army’s concept of so-called “intelligentized warfare,” which seeks to incorporate AI and other advanced tech into every aspect of warfare, according to the Pentagon.

“PLA researchers have stated that emerging technology such as artificial intelligence and big data are key to creating profound advancements in CDO. Since at least 2019, PLA researchers have called on the PLA to improve their big data, natural language processing, and deep learning capabilities in order to improve its ability to create deep fakes, disseminate propaganda, and analyze internet users’ sentiments,” the report said.

“Another PLA researcher suggested that the PLA should use AI to run its bot network on social media, which would be able to create content, and coordinate the optimal time to post on social media. If the PLA is successful in incorporating these technologies into operations, it could increase obfuscation of activities, create more plausible content, and enable more accurate targeting of audiences,” it added

Subliminal messaging, deepfakes and public sentiment analysis may be part of this more aggressive, next generation of psychological warfare, the study noted.

The Chinese military aims to achieve “information dominance” on the battlefield and conduct influence operations using cyber capabilities or other means. CDO-related technology could be used to spread misinformation and manipulate foreign audiences to further Beijing’s objectives, according to the Pentagon.

“The PLA probably intends to use CDO as an asymmetric capability to deter U.S. or third-party entry into a future conflict or as an offensive capability to shape perceptions or polarize a society,” the report said. “Authoritative PLA documents describe one aspect of deterrence as the ability to bring about psychological pressure and fear on an opponent and force them to surrender. PLA articles on CDO state that seizing mind dominance in the cognitive domain and subduing the enemy without fighting is the highest realm of warfare.” 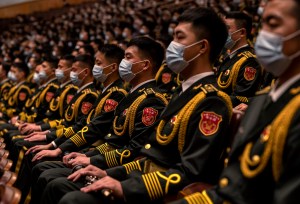