The Navy is considering the possibility of introducing air-launched hypersonic weapons into the fleet, although that thinking isn’t as far along as its plans for deploying sea-launched variants, according to the service’s top official.

The Navy aims to install hypersonic missiles on Zumwalt-class destroyers by 2025 and Virginia-class submarines by the end of the decade as it looks to acquire new “conventional prompt strike” (CPS) capabilities.

“We’re looking at that as a potential option, but not in real concrete terms right now,” he said. “But [what] we are looking at basically, most immediately, is getting CPS to function on the Zumwalt-class destroyers and as a follow-on, on the submarines as well.”

The Defense Department last week announced that the Navy had awarded Huntington Ingalls a $10.5 million cost-plus-fixed-fee contract to plan the Zumwalt-class DDG-1000 and DDG-1001 modernization period. That planning work — which is slated to be performed in Mississippi and is expected to be completed by December — is for a modernization project that will include the removal of the existing twin 155mm Advanced Gun System on each platform to allow the installation of four 87-inch tubes for hypersonic missiles, according to USNI News.

At the SNA symposium, DefenseScoop asked Del Toro if he was confident that hypersonic weapons will be ready to be deployed on Zumwalts and Virginia-class boats by the target dates.

“What I am confident of, is that I’m going to put as much resources and much attention, as much intellectual capacity in terms of my management team, and work … as closely with industry as we can to make that a priority and a reality. Now, if we have technical challenges that develop along the way, we’ll deal with those. But what I do know is that if we put the right talent, we put the right resources into it, hopefully, we will get there [on the Zumwalts] by 2025 or shortly afterwards. But this is a major priority for the Department of the Navy, and I am completely focused along with the CNO on making this happen,” he said.

Hypersonic missiles are designed to travel faster than Mach 5 and be highly maneuverable, providing a quick-strike capability against time-sensitive targets and posing a challenge to enemy air defenses. The Navy has been working with the Army on a common glide body for these types of systems. The Army plans to begin fielding its ground-launched Long Range Hypersonic Weapon later this year.

Meanwhile, the Air Force is pursuing its own plane-launched variants, such as the Hypersonic Attack Cruise Missile (HACM). That program will prioritize system integration on the F-15E fighter aircraft to enable “quick entry into flight test,” according to budget documents. 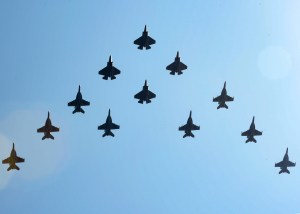