The Navy’s three-week Digital Horizon event to experiment with and integrate new unmanned and artificial intelligence platforms last month provided the military with “a visible demonstration of the promise and the power of very rapid tech innovation and discovery in fleet operations,” according to Vice Adm. Brad Cooper, commander of 5th Fleet.

Task Force 59 was launched in 2021 to accelerate the deployment of AI-enabled drones for complex maritime operations in the vast areas the Navy’s 5th Fleet covers — including bodies of water in the Arabian Gulf, Red Sea, Gulf of Oman and parts of the Indian Ocean. Naval forces are working with international military partners there to develop and deploy the world’s first fleet of unmanned surface vessels (USVs) that can capture and transmit images and data about what’s happening in those waters in real-time.

During its first-ever Digital Horizon event, which concluded Dec. 15, Task Force 59 brought together 17 commercial partners that, side-by-side, applied 15 advanced unmanned data integration and AI systems in Bahrain — 10 of which were introduced for the first time during exercise scenarios.

“We pushed those systems to their limits from about 30 different tactical scenarios to observe their true capabilities,” Cooper, who also serves as commander of U.S. Naval Forces Central Command, said at the Surface Navy Association’s annual symposium this week.

“Suffice to say, being able to work so closely with our industry partners was a game-changer. I think it’s a great model for how we do business going forward,” he added.

The first is “we’re able to advance operating in a mesh network,” he said.

Noting that he really just fully grasped what that term refers to over the last 9 months, Cooper said it is essentially the ability for the military to rapidly communicate and integrate in austere environments and where traditional comms might be denied — like the middle of the ocean during a war.

“It’s a very critical capability in potential future conflicts — and every platform operating in this exercise operated as part of a mesh network,” he noted.

“Then, we integrated with a NATO exercise in Portugal — including Starlink — iterating and learning,” Cooper said.

In about a six-week period, the product evolved to look nothing like it did in the beginning, and the team felt they’d established a functional command-and-control mesh network. At Digital Horizon, Task Force 59 officials took that work to the next level by successfully launching and operating an unmanned aerial vehicle (UAV) — for the first time — from a U.S. Coast Guard cutter.

“This was a significant breakthrough in further developing a resilient communications network for the unmanned systems to relay imagery, video and data to watch-standers at sea and ashore. Continuous development of this mesh network capability will be critical as we scale the integration of unmanned systems with artificial intelligence across the region,” Cooper said.

The second lesson involved the advancements in AI and data integration technologies that are currently commercially available.

“It’s fascinating how industry partners respond to design challenges for unmanned systems in different ways. Some converted traditional boats, and others designed their vessels from scratch. Both work,” Cooper said.

In his view, the systems demonstrated “incredible testament to rapid growth in the field, and very strong indicator that we are indeed on the cusp of an unmanned technological revolution.”

The task force’s third major takeaway from the exercise was the ability to operate on a single “pane of glass.”

“This is a phrase we use for describing how an operator can command and control multiple unmanned systems on one screen,” Cooper said.

He shared a video from the event showing how officials were able to apply AI to reduce the cognitive load on Navy watch-standers and help them make more-informed decisions quicker with camera-equipped drones and other capabilities.

The frame depicted different video feeds from multiple military systems operating across multiple domains — all being filtered through a mesh network. Service members were able to deploy drones to make sense of anomalies in the waters that AI tracked on the spot.

“This shows how unmanned systems combined with artificial intelligence can play a key role in detecting and disrupting illegal or destabilizing maritime activity,” Cooper said.

For his team, the fourth major takeaway was the rapid innovation that could be spurred by deeper collaboration with industry. Military officials saw software fixes within hours, and hardware updates within days, via the exercise, according to Cooper.

“Many of us have been through software changes [that take] months and hardware changes in years. So, it really is a paradigm shift,” he said.

The fifth and final lesson for the task force reinforced their belief that “every success we have is going to start and end with our people,” Cooper noted.

Inspired particularly by younger military members’ contributions to the work, he announced a brand new opportunity for junior surface warfare officers to lead task groups under Task Force 59 in Bahrain and USV Division One in San Diego.

Next month, the task force is planning to embark on a new international maritime exercise to continue to refine its capabilities. Cooper said discoveries made through it will be shared with the Navy’s other fleet components.

That “collaborative process accelerates innovation and shared learning, which really is essential to sharpening our competitive edge,” he added. 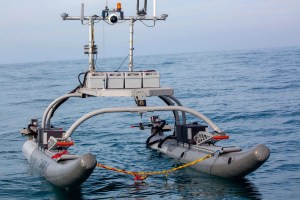