CIOs across the Department of Defense have heeded the widely circulated complaints of defense personnel, who took to social media platforms in recent weeks calling on senior leaders to “fix our computers.”

“We know there is a lot of work to do to make your user experience better, increase our #cybersecurity, and enable modern office productivity and analytical capabilities. We definitely haven’t been standing still on this point, however, and ensuring we deploy increasingly improving capabilities for you— the folks getting the work done every day in the Department— is our priority,” the note adds.

It comes a week after Michael Kanaan, director of operations for the U.S. Air Force and MIT Artificial Intelligence Accelerator, posted to LinkedIn a spirited open letter pleading with DOD leadership to “fix our computers.”

“Yesterday, I spent an hour waiting just to log-on. Fix our computers,” Kanaan wrote. “I Googled how much the computer under my desk costs in the real-world. It was $108 dollars. Would you ever buy a $100 dollar computer? Fix our computers.”

Kanaan makes the point in his letter that some of the most menial tasks, like sending an email, take more than an hour rather than minutes. And because of that, work hours that could go to innovation inside “the richest and most well-funded military in the world” are instead spent waiting on basic IT functions to work.

Kanaan’s post caught the attention of many, including some senior DOD IT officials who responded with their thoughts directly with comments on the post. As of publication, it spurred 369 comments and 2,285 “reactions.”

Since that initial post, other DOD tech officials have piled into the discussion, including Jason Weiss, DOD’s chief software officer, who wrote, citing his personal opinion: “Just one day I want to be productive at work and give my best for the warfighter without sitting here watching Outlook and Teams fight to see who can crash more often and render me useless in my humble pursuit of productivity.”

Likewise, Artem Sherbinin, a navigation officer in the Navy, wrote a similar post calling for senior leaders to not only fix the computer hardware but to “fix our software too,” adding that service members on the frontlines must be part of that solution.

The defense CIOs said in their post that work is underway to better enable secure telework, provide personnel with “new, higher-performing laptops,” and decrease network latency.

To this, Kanaan wrote on Twitter: “Responding directly to the needs of US servicemembers & employees is genuine progress in the right direction. I know we are all glad to see this conversation getting the attention it deserves, and appreciate it deeply.” 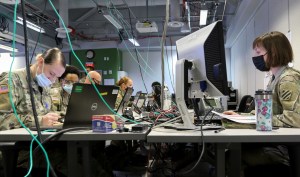 After calls to ‘fix our computers,’ military CIOs pledge to get it right