The military conflicts of tomorrow will be driven in large part by technologies like artificial intelligence, but the Department of Defense doesn’t yet have the talent and innovative mindset to achieve the “software supremacy” needed to compete with global powers like China, former Google CEO Eric Schmidt said recently.

“Why is software so important? Because the next battles will be fought based on software supremacy. They really will be,” said Schmidt, the former chair of the Defense Innovation Board and a major advocate for the U.S. military’s adoption of modern software practices and AI. “And you understand this — you’ve heard it. But you don’t have it yet.”

Speaking at the Air Force Association’s Warfare Symposium, Schmidt offered direct, blunt criticisms about the DOD’s continued struggle to innovate and adapt to the increasingly digital nature of defense. It’s something the Defense Innovation Board grappled with repeatedly under his leadership, during which time it produced a Software Acquisition and Practices (SWAP) study for the department.

“If I look at the totality of what you’re doing, you’re doing a very good job of making things that you currently have better, over and over and over again,” he said, adding that the DOD and military services often ritualize processes and systems as “God-given” without considering innovative alternatives.

He continued: “If I’ve learned anything in my now 45 years of innovative tech companies, it’s that rules can be changed with focus, with cleverness and with some real buy-in. And I would suggest that if we look at the things that are missing in terms of technological innovation, they’re precisely the things that we need to actually change the system to account for.”

In pockets across the military, though, this is happening, Schmidt said, pointing to the Air Force’s approach in developing the B-21 Raider. And it needs to be applied to “things other than bombers,” he said. “Like let’s try to do the same thing for software” and concepts like Joint All Domain Command and Control and “actually get it in your hands, get it working, get it now.”

On top of that, the military doesn’t yet understand that “software is never done,” he said. “So if you’re a person who accounts for something that has to be done,” as the military tends to think about acquiring weapons systems, “you’re always unhappy. Because software is never done. It’s a process of continuous improvement.” And what that tends to result in is “every time you try to do something in software, one of these strange scavenging groups within the administration takes your money away,” Schmidt said. “It’s insane.”

Schmidt’s points about software are largely in anticipation of the DOD’s need to more rapidly adopt AI.

“AI is a force multiplier like you’ve never seen before,” said Schmidt, who spent several years as chairman of the National Security Commission on Artificial Intelligence. “It sees patterns that no human can see. And all interesting future military decisions will have as part of that an AI assistant.”

“To be very blunt, you don’t have enough people. You don’t have the right contractors. And you don’t have the right strategy to fill in this,” he said. And while the DOD has fought tough battles to stand up the AI resources it currently has, like the Joint AI Center, that’s not nearly enough. “We need 20, 30, 40 such groups, more and more. And as that transformation happens, the people who work for you, the incredibly courageous people will have so much more powerful tools.” 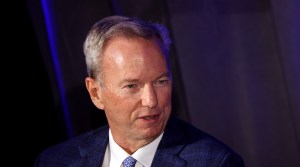 DOD doesn’t have what it needs for ‘software supremacy,’ Eric Schmidt says