Despite the U.S. government taking criticism for its approach to Russia’s information operations in recent years, the director of the Central Intelligence Agency believes current efforts to combat the Kremlin’s false flags and disinformation surrounding its invasion of Ukraine have been fruitful.

“I think the work that we’ve done — and it’s not without risk as an intelligence community — to declassify information has been very effective,” CIA chief William Burns told the House Permanent Select Committee on Intelligence during a hearing Tuesday.

In the run-up to the invasion, Moscow sought to perpetrate false flags and disinformation campaigns as a pretext for its attack. The U.S. government along with allies and partners quickly declassified several pieces of intelligence to expose this activity and thwart any Russian attempts to justify the Kremlin’s actions.

In recent years, as foreign information operations have become more prominent and efforts to effectively combat them have appeared difficult, the U.S. military and intelligence community (IC) have emphasized exposing them. Agencies declassified intelligence to disclose Russian troop movements and actions ahead of the assault on Ukraine. Those disclosures continued even after the invasion.

To a large degree, it’s unfamiliar territory for the intelligence community as agencies typically do not want to risk exposing how they obtain information. Protecting sources and methods is a top priority.

However, exposing adversaries’ activities can take the wind out of their sails and allow others to take defensive measures.

“I’ve sat for many years on the policymaking side of the table, and I’ve seen us lose information wars. In this case, I think by being careful about this, we have stripped away the pretext that [Russian President Vladimir] Putin, in particular, often uses,” Burns said. “That’s been a real benefit, I think, to Ukrainians. It’s been a real investment in the kind of actions that our allies have taken.”

This tactic of exposing adversaries’ activities, capabilities and tools, has been adopted by the U.S. military in recent years.

Some examples include exposing Russian behavior in space; highlighting activities of the Wagner Group — a Russian security company — as acting on behalf of the Russian government in Libya; and disclosing malware samples found during U.S. Cyber Command operations.

“Disclosure is cost imposing as it removes adversary weapons from the ‘battlefield’ and forces them to expend resources to create new weapons,” Col. Brian Russell, the commander of II Marine Expeditionary Force Information Group, said. “Disclosure forces the adversary to ask: ‘How were those capabilities discovered?’ It causes them to investigate the cause of the disclosure, forcing them to spend time on something other than attacking us. If I can plant a seed of doubt [by messaging] that the disclosure might have been caused by someone working on the inside, it makes them question the system’s very nature, perhaps spending more time and resources to fix the system.” 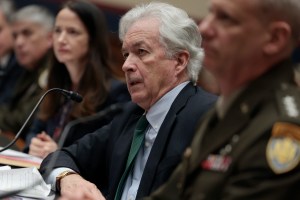