President Biden on Tuesday visited a weapons factory where he urged lawmakers to come together and pass the CHIPS for America Act to boost domestic production of semiconductors that are critical for U.S. military systems and a wide variety of commercial products.

The Creating Helpful Incentives to Produce Semiconductors (CHIPS) legislation would invest more than $50 billion to bolster American semiconductor production, but Congress has yet to pass it as part of a broader innovation bill and send it to Biden for his signature.

At Lockheed Martin’s Pike County Operations facility in Troy, Alabama, which produces weapons such as the Javelin anti-tank missiles that the United States has been providing to Ukraine to help its forces fight Russian invaders, Biden highlighted the importance of microelectronics for military systems.

“Each of the Javelins you produce includes more than 200 semiconductors,” he told workers at the factory, noting that the United States has committed to providing more than 5,500 of the weapons to Ukraine. “The semiconductor is critical to defense production capacity.”

Semiconductors are also key components for a wide range of commercial items such as smartphones and automobiles, he noted.

However, most semiconductors are now produced overseas and there is a global shortage exacerbated by the COVID-19 pandemic. The United States is currently dependent on foreign suppliers and vulnerable to supply disruptions.

“By funding the CHIPS Act, we’re going to ensure the semiconductors that power the economy and our national security are made here in America again,” he said.

“The events in the past few years have proven beyond a doubt that America’s security should never be held hostage to events overseas — not a pandemic, not a war, not the politics of ambition, or other countries,” he added. “So, let’s get it done.”

Biden also urged lawmakers to approve his recent request for $33 billion in supplemental funding for security, economic and humanitarian aid for Ukraine, which also included $550 million to establish a new Critical Munitions Acquisition Fund plus billions of dollars to replenish U.S. military stocks as the Department of Defense continues to send Javelins and other weapons to Ukraine.

His remarks came a day after the Pentagon announced a new $117 million investment to boost domestic manufacturing of critical microelectronics for its weapon systems. 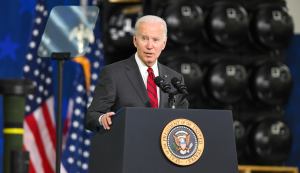