President Biden signed the CHIPS and Science Act into law on Tuesday, authorizing new policies and billions in funding to advance research and development and help fortify American technology manufacturing and supply chains.

Semiconductors, or chips, help power weapon systems, computers, phones, appliances, automobiles, and many other modern technologies. Though they were first invented in America, the nation now produces only about 10% of the world’s supply of chips — and none of the most sophisticated variants. The CHIPS and Science Act marks the U.S. government’s ambitious plan to change that.

“Earlier this year, I went down to [a Lockheed Martin factory] in Alabama where they are making the Javelin missiles that we’re supplying to Ukraine to defend itself against Putin’s unprovoked war. It’s crystal clear we need these semiconductors not only for those Javelins, but for weapons systems of the future that are going to be even more reliant on advanced chips. Unfortunately, we produce 0% of these advanced chips, and China’s trying to move way ahead of us manufacturing these,” Biden said on the South Lawn of the White House during a bill signing ceremony.

“It’s no wonder the Chinese Communist Party actively lobbied U.S. business against this bill. The United States must lead the world in production of these advanced chips. This law will do exactly that,” he added.

A 25% investment tax credit for capital expenses connected to the manufacturing of semiconductors and related equipment is also a requirement in the new law.

“To be clear, this law is not handing out blank checks to companies. Today, I’m ordering my administration to be laser-focused on the guardrails to protect taxpayers dollars,” Biden said.

Beyond its many financial incentives and requirements for semiconductors, the bill also aims to drive other science and technology pursuits — including several provisions that will directly impact the Defense Department.

For instance, the final version of the bill directs the secretary of Defense to conduct and support R&D and curriculum development — and assess potential national and economic security risks — in engineering biology and associated data and information sciences. The Pentagon is also directed by the law to support the Commerce Department and other agencies in accelerating innovation to advance the nation’s unmanned maritime systems.

Pentagon leaders have voiced strong support for the bill and urged lawmakers to pass it.

“The investments made through the CHIPS Act are critical to our national security, and will directly support maintaining America’s technological and military edge,” Defense Secretary Lloyd Austin recently said.

Further, the newly signed law also establishes a technology, innovation, and partnerships directorate at the National Science Foundation to focus on emerging and advanced capabilities. There’s also a number of new mandates for other agencies including NASA, the Energy and Commerce Departments and the National Institute of Standards and Technology, which is directed to establish a program for AI-enabled defense research.

Throughout his tenure as president, Biden has emphasized his aims to bolster America’s investments in science and research from less than 1% of GDP to near 2%, where it used to be in past decades.

“We used to rank No. 1 in the world in research and development. Now we rank No. 9. China was No. 8 decades ago. Now they are No. 2, and other countries are closing in fast. This law gets us moving up once again. It authorizes funding to boost our research and development funding closer to 1% of the GDP — the fastest single year percentage increase in 70 years — and it’s going to make a difference,” Biden said.

“This increase in research and development funding will ensure the U.S leads the world in industries of the future, from quantum computing and artificial intelligence to advanced biotechnology — the kinds of investments that will deliver vaccines for cancer, the cure for HIV, and invent the next big thing that hasn’t even been imagined yet,” he added. 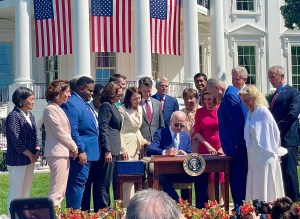