Secretary Christine Wormuth told lawmakers on the House Appropriations Committee on Tuesday the Army is exploring ways to use the authorities, which Congress granted the Department of Defense in 2016 to be more flexible in compensating and hiring cybersecurity talent.

Nearly six years later, Wormuth said the Army still faces a challenge in competing with other organizations for cyber experts.

“One of our challenges frankly is competing with the private sector,” she testified. “Everyone is looking for cyber experts, and in the private sector, they’re obviously well compensated. So that’s something I want to see us explore.”

Across the DOD, despite the enhanced hiring authorities, officials have struggled to improve the recruitment and hiring of technical talent. Part of that has been attributed to a lack of supporting infrastructure for the Cyber Excepted Service. And others contend the added flexibilities still aren’t enough for the Pentagon to get the talent at the scale that it will need to compete as the nature of defense becomes increasingly cyber-driven.

The Army is seeing success in identifying that talent, or training for it, within its existing ranks, said Wormuth and Gen. James McConville, Army chief of staff.

Among different organizations like the Army Cybersecurity Center of Excellence at Fort Gordon in Georgia and the Army Software Factory in Texas, the service is “finding, frankly, cyber and coding expertise all over the Army in places you wouldn’t expect and training those people and giving us the capability to really have Army soldiers at the tactical edge who can code and develop applications for us,” Wormuth said.

“We’re blessed that we have a lot of young men and women who want to go into cyber,” McConville said, pointing out that at West Point and in the Army ROTC, “that is one of the most competitive branches.”

McConville said once the Army does identify talent or train soldiers to become cyber warriors, it must find ways to keep them around. He told the story of a young medical specialist who works with the Army Software Factory.

Wormuth said what’s going on in Ukraine and the lessons learned there have demonstrated why cyber talent is so critical.

“The information domain is incredibly important,” she said. “The force that can dominate in the information space, I think, will have the advantage in future conflicts, so there’s a lot of a cyber dimension there.”

And while the U.S. has evaded major cyberattacks on its critical infrastructure of late, “I think that is something we can expect in the future,” Wormuth said. “So we’re looking a lot at how we can shore up vulnerabilities, whether it’s with our suppliers or in our own networks, to make sure that we’re not vulnerable to cyberattacks.” 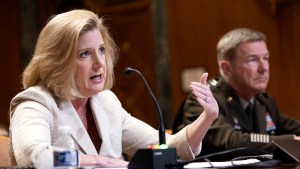