Six government agencies based around Washington, D.C., and two out-of-region affiliates recently launched a new consortium to jointly create — and ultimately connect through — an ultramodern quantum network testbed. However, other organizations, including from the private sector, may also be given the opportunity to conduct innovative experiments with the technology down the line, the organization’s executive director told FedScoop.

Through the newly unveiled Washington Metropolitan Quantum Network Research Consortium (DC-QNet), eight federal entities will contribute to a host of scientific and technical pursuits necessary to implement a functional quantum network for the U.S. government and Department of Defense.

Quantum information science (QIS) is a buzzy, emerging field that the U.S. government and its competitors have been increasingly prioritizing. The discipline seeks to apply phenomena associated with quantum mechanics to process and transmit information. Quantum networks are elements of QIS envisioned to one day provide the ability to securely distribute and share data among quantum computers, clusters of quantum sensors and other devices.

“This is an example of [federal] organizations with different missions working together on common scientific challenges that benefit all of their missions,” DC-QNet Executive Director Gerald Borsuk told FedScoop on Wednesday. “The synergism of their contributions will enable advances that none of them separately could achieve in an efficient manner.”

Principal investigators from the various government components will each steer tasks aligned with specific technical goals. Pursuits will include advancing metrology needed to operate a quantum network, infrastructure development, network simulation, and the implementation of novel capabilities and devices to enable this technology.

The door might later be opened to other organizations to participate in the initiative, Borsuk told FedScoop.

“Once the basic science and network configuration is established and experimental proof of key components and concepts are performed, other organizations including from [the public and private sectors and academia] may be given the opportunity to conduct innovative experiments on the DC-QNet,” he said.

Quantum networks will likely be essential to state-of-the-art, secure communications and computing enhancements in the decades to come, he noted. To work, they lean on the exploitation of quantum-entangled particles, such as photons, to move information in the form of qubits — the basic unit of information in QIS technologies.

Quantum entanglement refers to a unique property of atomic and subatomic particles that isn’t completely explained by classical physics. It’s essentially the relationship between such tiny particles where the quantum state of each can’t be described independently of the state of the others — even though they are physically apart.

“The successful demonstration of controlled quantum entanglement distribution amongst three physically separated nodes represents a key outcome” the DC-QNet aims to achieve, noted Borsuk, who also serves as the associate director of research for the Naval Research Lab’s Systems Directorate.

In February 2020, the Energy Department hosted a quantum networking workshop in its New York City offices, which many scientists and engineers attended — including Borsuk.

Shortly thereafter, it came to light at a Naval Research Lab meeting that dark fiber — or fiber not being used for traditional telecommunications and with no optical-electronic-optical interfaces — connected several government laboratories that had ongoing research in QIS, and specifically quantum networking. Those discussions eventually led to a virtual workshop in November 2020 organized by NIST.

“The workshop included participation by all the U.S. government laboratories performing quantum research in the Washington Metro area,” Borsuk noted.

Through the workshop, the experts involved defined their areas of mutual research interest that could be key to implementing a quantum network.

“Given the excitement around these activities, the executive technical leadership of these organizations started meeting monthly, and DC-QNet evolved into the current organization,” Borsuk said. 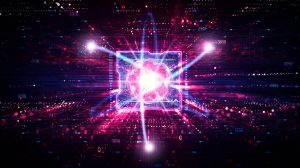