The United States needs to rethink how it’s funding the development of quantum technologies — and resolve extensive uncertainties — as it races against competitors to make advancements in this emerging field, according to the Pentagon’s principal director for the tech.

Quantum information science (QIS) involves the investigation and application of bizarre phenomena that occur at atomic and subatomic levels to process and move information. Experts predict it will enable transformational science, engineering and communication applications in the future — like an unhackable internet, or GPS in remote environments.

The Defense Department has been pursuing QIS-aligned initiatives since at least the early 1990s, John Burke, principal director for quantum science in the Office of the Undersecretary of Defense for Research and Engineering, noted Thursday during the ExecutiveBiz Quantum Technologies Forum.

A lot of progress has been made, but in his view, there are many unknowns to tackle before a scalable quantum system can be fully realized.

While there is a great deal of hype surrounding the technology, many components that will make up the ultramodern systems are still in their infancy. Enabling quantum success will also rely a lot on public-private partnerships, as different hubs develop specialized platforms that may need to work together as the tech evolves. Burke pointed to uncertainties around funding both in the near term and down the line.

“Today, it’s just my observation that a lot of the funding for quantum technology has been around a particular application and maybe a particular component for that application. There’s not much larger ecosystem related-funding — and I think that’s something that needs to change,” he said, adding, “even if quantum computing takes off as we all hope, it’ll still be a very low-volume demand compared to, say, consumer electronics. So, there’s always going to be a question mark.”

“I have more questions than I have answers,” he also noted.

One realm of QIS involves next-generation quantum computing. While classical computers are made up of basic units called bits that each represent a one or a zero, quantum computers would be based on quantum bits — or qubits —  which can exist in multiple states at any one given time.

Burke noted that, right now, the sharpest focus from the government and industry is on two types of quantum technologies.

“There’s sort of a set of qubits that require cryogenic dilution refrigerators, mostly — and microwave links, oftentimes, but not exclusively. There’s another set of devices and ideas that use photons as sort of carrier qubits and often require a vacuum, or a potentially ultra-high vacuum to operate,” he explained.

The Pentagon currently has a “little bias towards” photonic systems, Burke said, due partly to how they align better with quantum sensor-related efforts the department has been investing in over the years.

“You could debate about how many qubits we need for any particular application, but sources kind of point to 1 million to 10 million, or maybe even more qubits,” Burke said. He added that right now, the DOD is still “figuring things out like what is the layout of these, and how would you use a small number of qubits effectively?”

He and his colleagues are also “trying to figure out where utility might come from” once quantum machines are fully operational. Presently a lot is up in the air in terms of where QIS can offer the most advantages.

“There are heuristics out there that are, by their very nature, not predictable. We’ll have to build a computer to see how well that’ll turn out, I think. So, it could be that there’ll be a lot of applications that we just don’t have the capability to predict right now,” he noted.

“The good news is there are going to be breakthroughs, because a lot of really bright people are working on this,” he added.

Burke said that, at DOD, his door is always open for recommendations on how to proceed with confronting these many unknowns.

“If you have an idea — even if it’s not very good — that’s a starting point. So, all ideas are welcome,” he said. 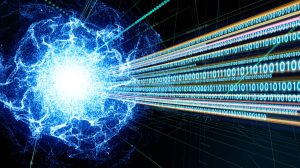