The Air Force will soon install a new leader to oversee all of its complex command, control and communications initiatives and ultimately empower the military branch to better support the Pentagon’s ambitious vision for a more connected way of conducting warfare, according to Secretary Frank Kendall.

“We’re going to be putting someone in charge of that overall enterprise of C3 battle management for the Air Force. We’ll be naming someone very shortly and they’ll have responsibility for pulling it all together and focusing all that work and making sure it’s truly joint and interoperable with our allies, as well as works together for the Air Force,” Kendall said Wednesday at the Defense News conference.

The secretary and his team are in the process of determining the service’s budget request for fiscal year 2024. He further confirmed that a bit of that funding will likely be focused on getting JADC2 and ABMS “right from the Air Force.”

Though he would not go into great detail, Kendall added the next budget will focus heavily on the relatively recently conceptualized operational imperatives the Air Force crafted to confront war-related threats of the future and modernize contemporary assets.

​​”I just got back from the Pacific. I visited Hawaii, Guam, Australia, Japan, and Alaska — and we clearly need to take steps to make our bases more resilient, and to make agile combat employment a priority,” Kendall noted. “And those are things that we can do relatively quickly.”

Another operational focus, and anticipated area of more fiscal support in the coming years, involves introducing unmanned collaborative combat aircraft as components of a new family of systems for its Next-Generation Air Dominance (NGAD) program.

Those priorities and the other operational imperatives were structured by Air Force officials based on existing and “very foreseeable” gaps in the branch’s capabilities, the secretary noted. From that lens, Kendall also spotlighted the United States’ long-term, high-stakes technological competition with China and how it requires further strategic investments and innovation from the branch.

“Let’s be clear about that. The strategic competitor or the pacing challenge is China — and China has been working for about 30 years now to develop and fuel capabilities designed to keep the United States out of the region of the western Pacific,” he said. 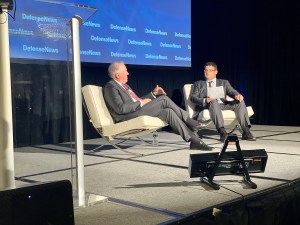