The Other Transaction agreement, worth up to $176 million, is for the development, manufacture, deployment, launch and operation of 10 space vehicles and mission-enabling ground systems.

The spacecraft for the National Defense Space Architecture Experimental Testbed (NExT) are set to begin flying in 2024. Ball Aerospace will integrate government-furnished payloads into the NExT satellites and operate them from the company’s facilities in Colorado.

The SDA plans to deploy new tranches of low-Earth orbit satellites every two years that can incorporate new payloads with additional capabilities. The first Tranche 0 systems are scheduled to launch in December.

The NExT platforms will not be part of that architecture, but payload capabilities that are successfully demonstrated as part of the NExT initiative could potentially be incorporated into Tranche 2 spacecraft — which are scheduled to fly in 2026 — and subsequent tranches, SDA Director Derek Tournear said at DefenseScoop’s DefenseTalks conference last month.

“The whole concept there is there are a lot of missions that the department can do with a proliferated architecture in low-Earth orbit. There are some of those missions that we’re confident we can do, like this data transport layer and the tracking for missiles. And then there are others that [are] really still more experimental,” he said.

He continued: “What is the next-generation tactical data links that our services are fielding? Can we talk to those from space? We think we can … Can we do alternative PNT? We think we can. But other services are developing payloads that we will fly on our NExT satellites, and if those work, then that’s something that we would proliferate in the future tranches.”

The systems will demonstrate low-latency data transport and beyond line-of-sight command and control, the SDA noted in a press release on Tuesday when the prototype agreement was announced.

“NExT is an exciting program that has a lot of tie in with our mission partners and will help to advance future tranches of the National Defense Space Architecture,” Tournear said in the release.

The SDA had issued a solicitation for the initiative in July asking vendors for proposals.

“We’re confident that selection of the Ball Aerospace team provides the best overall solution to deliver NExT, including payload integration and launch,” Tournear said.

“As the prime contractor on this program, Ball Aerospace is leveraging our heritage and proven experience of assembly, integration and test of complex payloads while bringing together an innovative industry team to quickly deliver needed capabilities to ensure SDA mission success,” company president Dave Kaufman said.

The plan is to continue the testbed initiative indefinitely, Tournear suggested at DefenseTalks, and industry will have additional opportunities to compete for the program.

“The whole model for SDA is predicated on this spiral development model where every two years we will put new capabilities in space. And so industry can … invest and create an offering and win a fraction of that market share. And NExT is no different. So, NExT will be re-competed every two years as a way to do this experimentation as [we] ourselves come up with new payloads for our mission partners. We’re going to continually re-compete and apply those,” he said. 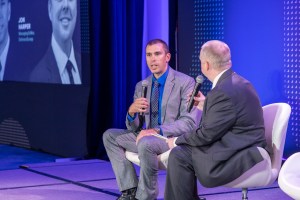