Cloud computing is the wave of the future as the Navy looks to combine the technology with robotic platforms, Secretary of the Navy Carlos Del Toro said Tuesday.

The cloud is a high priority for Del Toro as the sea service moves forward with developing and fielding unmanned platforms and new networking capabilities for Project Overmatch, he noted at the AFCEA NOVA Naval IT conference.

The service’s top official noted that U.S. Saildrones, which were temporarily captured by Iran while operating in the Middle East region last month, were using the cloud to store data. The unmanned surface vessels were equipped with cameras on board to collect intelligence, surveillance and reconnaissance information, which was then uploaded to the cloud rather than being stored on the platforms.

Del Toro said he “didn’t lose sleep” when the USVs were captured because he knew the data they had collected was secure.

“The fact is that even if we had lost the Saildrones it wouldn’t have mattered. All [the Iranians] got was a $25 camera off the Saildrone. All the information was in the cloud. We gave nothing up,” he said.

“Thinking differently about how we can employ unmanned technology to our advantage in a far more effective and economical way, is the way of the future. That’s what cloud computing is all about. To be able to take all that data basically and have it not necessarily be accessible to the enemy through the capture of an unmanned drone — that was just fabulous. I know there’s a lot of hype in the media about the fact that the Iranians took the drones for a period of time before we got them back, what would we lose and all that kind of stuff. [But] we lost nothing. That’s the way of the future. That’s how we’re gonna fight,” he added.

The Navy is pursuing a variety of robotic platforms including aerial drones, USVs and unmanned undersea vessels of various sizes. The service has been exploring the technology during large-scale exercises like RIMPAC in the Indo-Pacific as well as with Task Force 59 in the 5th Fleet area of operations.

New command-and-control capabilities are also in the works as part of Project Overmatch, the Navy and Marine Corps’ contribution to Joint All-Domain Command and Control (JADC2). As more unmanned systems are deployed, the sea service wants to create a mesh network and team them with manned platforms.

“The C2 web that holds all that together is incredibly important as well, too. So we’re developing the concepts of operations that are necessary for manned-unmanned technology to work together. That’s incredibly important before we make some really firm commitments to certain technologies and [begin] producing them and buying them in much greater numbers as possible,” Del Toro said.

He added that “soon enough” the Navy will start including robo-ships in official battle force ship counts as the technology matures and gets fielded. 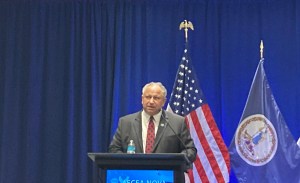