President Joe Biden’s nominee to be the next undersecretary of defense for acquisition and sustainment said expanding munitions stockpiles for the U.S. military and international partners will be a top priority if he’s confirmed by the Senate.

The importance of advanced munitions has been highlighted in recent weeks during Russia’s invasion of Ukraine.

Since the large-scale Russian attack kicked off on Feb. 24, Ukrainian forces have put up stiff resistance with the help of foreign-supplied weapons.

Last week, Biden authorized the transfer of $800 million worth of additional military equipment to Ukraine. The package includes 800 Stinger anti-aircraft missiles, 2,000 Javelins, 1,000 light anti-armor weapons and 6,000 AT-4 anti-armor systems, and more than 20 million rounds of small arms ammunition and grenade launcher and mortar rounds, according to a White House fact sheet.

The weapons are to be transferred directly from Department of Defense stockpiles.

“If confirmed, one of my first things to do on day one will be [to] accelerate all equipment and capabilities to both the Ukrainians as we agreed to, and also helping our NATO partners and replenish our stockpiles,” William LaPlante Jr. told members of the Senate Armed Services Committee Tuesday during his confirmation hearing.

“Our munition stocks are too low in priority theaters,” he said at the hearing. “We don’t have the capacity to produce enough munitions and ammo in the timeframe” that’s desirable.

That presents a challenge for both deterrence and warfighting, he added, noting for example, that there are no “hot” production lines making Stinger missiles that could quickly replace the ones that DOD is sending to Ukraine.

When asked if the U.S. government needs to make some one-time investments this year to expand the production of key munitions, LaPlante answered in the affirmative.

“Yes, we do,” he said. “I believe we need multiple hot production lines” to produce munitions and UAS. “They, by themselves, are a deterrent and we need to put much more focus on that across the board.”

Increasing the rate of production for existing munitions and drones over the next year will be a key metric of success when it comes to getting advanced capabilities into the hands of troops, according to LaPlante.

Getting emerging technologies such as hypersonic missiles — which can fly faster than Mach 5 and are highly maneuverable — fielded and ready for operational use will also be critical, he noted.

After the hearing, LaPlante told FedScoop that supplemental funding might be needed for fiscal 2022 to bolster munitions production.

“What we have to find out and I have to find out, if confirmed, is … how far or close are we to a minimal sustainable rate. And then what’s the demand overseas, and looking to see whether we have the funding for it. If they do need funding we may have to do a supplemental. I just haven’t looked at it” yet, he said.

Getting defensive weapons like Javelin anti-tank weapons to Ukraine and replenishing those stocks is the most urgent priority, he said. However, “If confirmed I intend to look at all of it,” he added, referring to the broader DOD munitions portfolio.

LaPlante has had a long career in the national security arena, including serving as assistant secretary of the Air Force for acquisition, technology and logistics during the Obama administration. 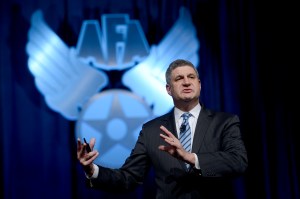