ABERDEEN PROVING GROUND, Md. — The Army is working towards moving several prototyping efforts aimed at improving tactical network and radio management to a program of record in fiscal 2024.

To date, the Army has been conducting several prototyping efforts through middle-tier acquisition to streamline the variety of tools network managers currently have and simplify them through a singular interface.

“The struggle comes in that a lot of those efforts right now are stovepiped efforts. Each one of those lanes is a new system, a new tool, a new way of doing that. It’s very cumbersome on the soldier and it takes a lot of time and effort. It’s just not efficient. What we’re looking to do is reduce the cognitive burden on the soldier and make it more efficient so they’re able to perform the battlefield functions a lot simpler,” he said.

The prototyping efforts began in 2019 and will continue through 2023. Jordan said the program will eventually transition into a program of record, ideally in 2024, where a vendor will take it and consolidate it further.

The prototyped tools include the Ruggedized Applications Platform-Tactical Radios (RAP-TR), which is a laptop that runs software called Atom to quickly plan and load data on things like software-defined radios. When tactical radios are put into the field, they need to be loaded with security, the names of the users and IP addresses. RAP-TR is a tablet type system that is more intuitive to the user and allows them to perform these functions more seamlessly, according to officials.

Other efforts include the Integrated Battalion and Below System, which acts as a tracking system for lower tier radios, as well as the Network Operations Management Suite, which is the upper tier planning, management and monitoring system.

The eventual plan is to get these systems to work as microservices on a common interface, similar to apps on a smart phone.

“What UNO will ideally do in the future is we’ll have these microservices subscribing to an API that allows that soldier to pull up all these tactical apps that they may need to perform those functions that we talked about: the planning, installing, managing, monitoring and securing of the tactical network,” Jordan said.

He continued: “This goes on right now [but] it’s just in a more inefficient way that takes a long time, so much more cumbersome … If you just think about it from a cognitive load perspective, if I’m having to swivel around all these different systems, you’re probably missing something. You’re not getting an optimal view, you’re not making optimal decisions versus if everything was consolidated where I could see overlays, I can see my network, I can see icons.”

Understanding the network will be critical for the future of command and control. For example, a brigade might have 2,000 radios on its network. It is currently very cumbersome to load, process and monitor all the radios. But if these functions are simplified, network managers will be able to have exact data on those systems, which is working properly, or which might be jammed, providing better information to commanders to make more informed decisions.

Feedback from soldiers who have tested this gear has been positive, and soldiers in 2nd Cavalry Regiment in Germany said it was a lot simpler to load and configure radios, according to officials. Moreover, the RAP-TR capability is much smaller and easier to carry than a laptop.

Once the Army transitions UNO to a program of record where a vendor will take it over, the contracting community will be required to use open source software. Jordan noted that once it’s off and running, he suspects the program will use the Pentagon’s software acquisition pathway.

“This is a good candidate for that type of program. But [with] rapid updating, new features can go out really quickly,” he said.

The Army doesn’t want to get into a vendor lock scenario if it has to pivot from one vendor to the other down the road. It wants the flexibility to be able to insert new technology from any vendor as technology matures or the threat evolves.

“We would take that [application programming interface] and [to] the next vendor we say, ‘Here we are, this is the API that these microservices subscribe to, here you go’ — and we’re off and running and it doesn’t cause a significant ripple as we change over from one vendor,” Jordan said. 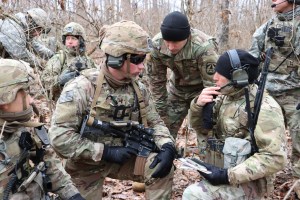