NASHVILLE, Tenn. — The Army is looking at how it could take the ways the XVIII Airborne Corps is using artificial intelligence and data flows and apply them more broadly across the force and in other theaters.

As the Army is transitioning to multi-domain operations — which calls for the service to combine and integrate land, air, maritime, space and cyber capabilities — it must be able to more rapidly synchronize information and data from all domains so commanders can make more informed decisions, faster.

“One of the things that the Army’s working on is really how do we flesh out our MDTF, our Multi-Domain Task Force, our multi-domain operations and how do we take lessons learned across the board to figure out how do we operationalize the whole notion of the MDO?” Young Bang, principal deputy assistant secretary of the Army for acquisition, logistics and technology, told DefenseScoop in an interview.

The XVIII Airborne Corps has taken what officials refer to as a “factory floor” approach by bringing in experts from all echelons and even coalition partners to work on hard problems and synchronize information. That could potentially serve as a template to be piloted elsewhere.

“One of the things that [Lt. Gen. Chris Donahue] has been really trail boss on is really building an organization — and he calls it the factory floor. He has really pulled and centralized a whole bunch of people that typically are at different echelons, different even partners and allies, and different organizations even outside the Army, intel and others, into one factory floor so you can get decisions done quicker,” Bang told reporters last week at the Army’s Technical Exchange Meeting, referring to the XVIII Airborne Corps’ commander.

The corps has also worked to develop workflows that automate processes, leveraging algorithms built by the Department of Defense.

“Maybe the algorithm says this [piece of information] may be of interest — then we actually have our analysts deep dive into really identifying yes, no, those type of things, then accelerating that through a workflow to all the right people and the decision makers to include countries and other organizations outside of Army and DOD, to get that validated to push out the packages,” he said. “If you think about that concept, where literally some of these people who are geographically in different areas, they’re all centralized and then we are automating the workflow. This literally took days and sometimes weeks [in the past] and we are automating that whole thing.”

XVIII Airborne has done good work, Bang said, to enable activities such as taking feeds and data from multiple sources or looking at command and control.

All these lessons are being brought to other experimentation venues such as Project Convergence and possibly other theaters to explore the practicality of scaling, which is the most difficult task.

Bang said the Army sent teams from Futures Command and ASAALT to start documenting how the XVIII Airborne Corps is observing, integrating and using data, and leveraging technology to make things more efficient, with an eye toward scaling it enterprise-wide.

The Army is trying to see what lessons from XVIII Airborne’s work can be applied doctrinally to U.S. Army Pacific and what trends there are with data prioritization and mission command needs that can be worked into data fabrics and data meshes as they start to look at data prioritization across the entire force.

This is all especially important as the Army is also transiting to the division as the primary unit of action rather than brigades, which were the focus during the counterinsurgency wars in Iraq and Afghanistan. As the Army is moving to larger echelons, it will need to determine how to fight with those echelons and what data they’ll need.

“How we’re fighting now, doctrinally and operationally, we’re fleshing out. We’ve moved to more of a division construct. And in certain areas with that we’re really trying to flesh out at the corps level, what are these operational nodes that need to be in place against this?” Bang said. “Now that we’re fighting larger, or the operational doctrine is fight larger divisions and corps and different theaters, how do we actually operationalize some of those components that we’re missing or some of those components that we are still trying to flesh out? That’s exactly what [Donahue] is doing with the XVIII. At that corps level, he’s bringing in all the different players, coalition allies, different echelons, to really iron out how do we fight now as a corps or how would we fight in as a corps or even a theater in the future?”

XVIII Airborne, given its primary theater is Europe, has a lot of access to operational data in the Ukraine conflict. This real-time data is better than some of the training data the Army has used previously, allowing officials to have a better set to test against and figure out how to operationalize the concepts they’re working on.

“Looking at that real-time data versus doing it on our pure training data or pure training exercise data type of data, gives us really a valuable insight,” Bang said. “Looking at the real data to figure out how they would operationalize things outside into an exercise or other things is really the insights and the nuggets that we’re really looking at.” 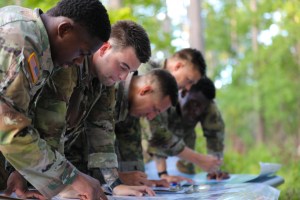