Deputy Defense Secretary Kathleen Hicks has directed every component within the Office of the Secretary of Defense (OSD) to designate its own data officer by Oct. 15, according to a new memorandum obtained by DefenseScoop.

The one-page memo — addressed explicitly to senior Pentagon leadership, commanders of the combatant commands, and Defense agency and DOD field activity directors, with “Leadership to Advance Data Quality and Trustworthiness” in the subject line — marks the latest move in a broader push to ensure the department can apply the huge volumes of data its entities capture to better inform military decision-making.

With sights set on accelerating its shift to a data-centric and data-driven organization, the Pentagon released a comprehensive data strategy in September 2020.

Then, in May 2021, Hicks released a memorandum addressed to department leadership regarding “Creating Data Advantage.” In it, she listed five “DOD Data Decrees” further guiding senior officials to make data more securely, widely and reliably accessible for broader consumption and use.

“To ensure this occurs, within 30 days of the date of this memorandum, [OSD] components are to designate a Data Officer, to develop, manage, and oversee the implementation of data management policies within their scope of responsibility, as outlined in the DOD Data Stewardship Guidebook (October 2021),” Hicks wrote in her latest memo, dated Sept. 15.

The Pentagon’s No. 2 official has also led a major organizational restructure to place a number of data- and AI-enabling components under a newly established office that was created last December. That office — headed by the DOD Chief Digital and Artificial Intelligence Officer (CDAO) — will provide “implementing guidance to all OSD and DOD components regarding Authoritative Data Sets to ensure that data is trustworthy,” Hicks wrote in the new memo.

The CDAO’s guidance is to be reviewed and revised within one year to incorporate lessons learned as the different units pilot processes connected to this work.

“I expect leaders across the department to work collaboratively as we mature our processes to make data trustworthy,” she wrote.

Though the DOD didn’t make a public announcement on this call for new data officers to be named by mid-October, Hicks recently shed some light on her overarching blueprint to scale data applications and digital assets across the department.

When Hicks and her team assumed their current roles, they quickly noticed that the department “was really struggling with data” and was therefore facing challenges in fully realizing AI capabilities, she said on Friday at a summit hosted by the Special Competitive Studies Project.

Hicks noted that she responded by issuing the decrees, standing up the CDAO — and she intends to see data officers across components working together.

“There is absolutely religion on data, [I] never thought I would see it,” she said. “I joke sometimes that we’re bringing the Defense Department into the late 20th century. People actually want to use data to link to outcomes … As small as that sounds, as you get closer to the tactical edge that is exactly what you need. So the data piece is well underway.” 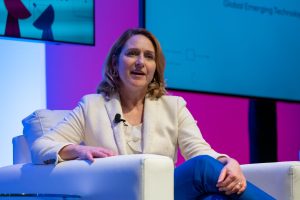