The Army’s top IT official on Wednesday questioned the utility of the service’s current classified and unclassified network configurations and instead pointed to the possibility of relying on commercial systems that could be more resilient in future conflicts against sophisticated adversaries.

Adversaries will contest U.S. forces unlike ever before, straining the network and making it harder for data to be passed back and forth and accessed at the right time, said Army CIO Raj Iyer. As a result, forces must be more adaptable and take advantage of various means for communication and transport, such as commercial solutions.

“Our strategy again here is to get to greater resiliency, with commercial transport, using dark fiber, a heck of a lot more encryption when it comes to secret … The need for us to have … physical separation of data and networks for SIPR, or SIPR to ride on NIPR, those days are gone,” Iyer said during a presentation hosted by GovConWire

“What we have been able to show if you have the right encryption in place that’s quantum-resistant and we were able to use solutions like commercial solutions for classified, and we have shown that today … and validated that. It really questions what do we need a SIPRNet for? Why do we need a whole separate network, that we can actually do pretty damn well with encryption,” he said. “Then absolutely the same question on NIPRNet. If we move all of our data and applications to the cloud and if I can get to a virtual desktop in the cloud and I can use any open available internet to be able to access all of that through any device, then what do we really need the NIPRNet for?”

These questions arise as the Army is developing its unified network plan — part of its larger digital transformation strategy — which aims to synchronize and connect the service’s enterprise and tactical network together.

Currently, silos exist between the two, creating barriers for troops who want to pass data across echelons or even theaters. This especially creates problems when troops move from one theater to another, as seen most recently in Afghanistan.

“I saw forces come into the theater that were not able to join the network right away. It was really, really cumbersome for everything that we needed to do while I was there,” Brig. Gen. Jeth Rey, director for the Army Network-Cross Functional Team, said in October.

For Iyer, the Army needs to question the status quo to evolve and succeed in future battlefield environments.

“We’re thinking out of the box. I’m not saying you have all the solutions, but we really going back to the direction I have from my boss, this is how we’re going to transform,” Iyer said about the Army’s modernization approach and potential for using more commercial solutions in an attempt to be more resilient from adversary disruptions.

He added that if the Army doesn’t question the status quo, it will be limited by aging technologies and architectures from the past.

One such example from the Ukraine-Russia conflict Iyer and others have pointed to is SpaceX’s Starlink satellite constellation that provides internet coverage.

Despite Russian attempts to jam the system in Ukraine, the following day, Starlink reported adding new lines of code that rendered the jamming ineffective.

“We saw how Starlink is actually tremendously helping establish a communications network in an environment that we thought would be degraded on day one,” Iyer said in April.

Army forces must be able to communicate and pass data in denied and degraded environments in the future.

“As we get into more of a distributed command and control structure, what we really don’t want is a massive command post that has all of this IT in one place, where we become bullseye for our enemies,” he said Wednesday. “Moving to the distributed C2 means that we’re going to have to leave data in multiple places with greater resiliency, we’re going to have to rely on all kinds of transport, not just MILSATCOM, but commercial SATCOM, as well and this is where the example I gave you with Starlink and how we’re using that today in Europe is a great example. All of this coupled with … compute at the edge is going to be absolutely critical in terms of supporting tactical operations.” 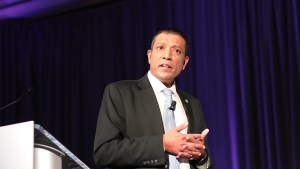 For resiliency, the Army may look to rely more on commercial systems than SIPRNet, NIPRNet