The Navy is still fleshing out plans for medium-sized unmanned surface vessels and the roles they could potentially play in a future “hybrid” fleet of manned and robotic platforms. But prototyping is being carried out with flexibility in mind, Rear Adm. Casey Moton noted.

Medium USVs could be used to conduct a variety of missions, such as intelligence, surveillance and reconnaissance (ISR), or to conduct attacks.

“There’s a reason that … we’re doing a lot of prototyping with vessels that can take some containerized payloads because, you know, that makes potential integration of new and different payloads — kinetic and non-kinetic — easier,” Moton, the program executive officer for unmanned and small combatants, said at the Surface Navy Association’s annual symposium on Thursday.

“Regarding how unmanned is gonna play in that [future operating environment], I mean, we’re kind of learning that. You know, 5th Fleet [is doing] lots of work in the ISR area. If you want at least one country or one area’s vision of how unmanned may play in a kinetic fight, just watch the news coming out of the Black Sea [where Ukraine has been using drones, including USVs, to monitor and attack Russian forces]. And I think the rest of us will see how that goes. But we’re trying to get all the building blocks ready to support whichever way the mission goes,” he said.

While the Navy has not fully committed to acquiring a fleet of medium USVs, Moton noted that large unmanned surface vessels are a high priority for the Navy.

Moton said the sea service is “pretty sure about” the requirement for having large USVs serve as an “adjunct magazine” of weaponry. But other requirements have yet to be nailed down.

However, he emphasized that the concept of operations for these types of systems will be “fully compliant” with the Defense Department’s autonomous weapons policy.

“The LUSV ConOps is not intended to be [fully] autonomous. It is engage-on-remote just like we already do in our Aegis [destroyer] fleet. The only difference is the human that’s actually making the engage decision is sitting on a platform other than the USV, right. So we’re bringing that capability. We, I think, demonstrated that at sea very publicly,” he said, noting that the Navy has experimented with launching an SM-6 missile from one of its prototype vessels.

“We’re trying to make sure … to support the LUSV mission and other kinetic options,” he added.

Meanwhile, the Navy has been experimenting with a variety of unmanned surface vessels. Four prototypes have been fielded – including two Overlord platforms and two Sea Hunter vessels — and they are seeing “heavy use,” according to Moton. Three others are in construction or being prepared for testing.

The service is also helping with testing of developmental and prototype payloads.

Prototype robo-ships have been operating in concert with manned ships and controlled by sailors on other platforms or ashore.

“That is getting to be really very exciting. That work is helping the development of ConOps by the fleet and it’s building trust by the fleet in unmanned systems, and it’s providing feedback to our engineers and program office teams,” Moton said.

The RIMPAC exercise was a “capstone” event last year for the drones. The systems traveled a total of 15,000 nautical miles in “autonomous mode” and executed over 700 missions during the event, according to Moton.

“Some of those missions are, ‘Go from point A to point B and don’t hit anything,’ right. But … those are the building blocks. And we’re seeing a lot of success,” he said.

The Surface Development Squadron, based on the West Coast, is forging ahead with prototype projects. And the Navy also participated in NATO’s Robotic Experimentation and Prototyping with Maritime Unmanned Systems (REPMUS) exercise in September.

PEO for Unmanned Systems and Small Combatants is also keeping a close eye on what the 5th Fleet’s Task Force 59 is doing in the Middle East. The task force, which is experimenting with using AI-enabled drones and the cloud for ISR, recently reached full operational capability.

“We stayed pretty tightly connected with them, very aware of what they’re doing and experimenting. And … we are definitely getting the feedback for how it’s going and are watching them,” Moton told DefenseScoop at the SNA symposium. “It’s just as important in supporting our requirements process on what we want to field. But in terms of like the basic technology on manned-unmanned teaming, we are getting a lot of feedback from them.”

DefenseScoop asked Moton if the task force’s work was informing engineering and systems development in addition to requirements.

“I think both,” he replied. “The mission that they’re doing in 5th Fleet is an actual operational mission, right. So, we don’t want hordes of engineers roaming over everything. But we are getting plenty of feedback.”

Secretary of the Navy Carlos Del Toro is planning to establish similar task forces in other regions, including potentially Central and South America and the Pacific, which could also inform the work of Moton’s program executive office.

“We’ll see some of the details of the new squadrons. And certainly, I’m aware and completely supportive of what the secretary is talking about. And … I’m not going to let any of that kind of unmanned operations go without us being able to get lessons learned and helping our development process,” Moton told DefenseScoop. 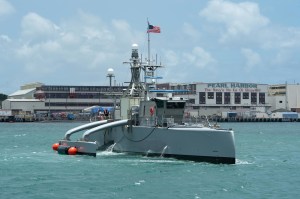