American forces in Africa and their partners will likely come under attack by armed drones operated by violent extremist groups in the not-too-distant future, the commander of U.S. Africa Command is warning.

“I don’t know why it is, but we haven’t seen that occur yet in Africa. But I suspect it’s coming any day,” he said. Small drones are “proliferating everywhere, rapidly. They’re low cost, and they can be quite effective and challenging to defend against.”

Townsend has first-hand experience coming under attack from unmanned aerial systems (UAS) while serving in Mosul, Iraq, in 2016.

“ISIS figured out how to arm their drones and attack us either with kamikaze explosive-laden drones or drones that dropped field expedient munitions or modified munitions. So they got pretty sophisticated with that,” he said.

Groups in Africa are already using UAS to support their operations, according to Townsend.

“We see them using drones for reconnaissance. We believe we’ve they’ve used drones for fire direction. The reason we believe that is we have had instances where drones immediately preceded mortar or rocket attacks or were there during the mortar or rocket attacks — so why else would you be doing that unless you’re trying to direct the fire?” he said. “And we’ve seen them precede ground assaults as well. I have not yet seen them come armed. But it won’t surprise me when it happens,” he said.

The Pentagon has been developing capabilities to counter these types of threats. Many of these efforts are being led by the Joint Counter-small Unmanned Aerial Systems Office (JCO).

African partners have already asked for U.S. assistance with counter-drone capabilities, according to Townsend.

“We are working on ways to help those partners that have that problem. For the most part, where the terrorists are sophisticated enough to have that capability is where our troops already are, for the most part. So that makes it a little easier. But that’s not true in all cases, and so we’re gonna have to look at how we help those partners. I think this is going to be a big problem for all of the Western partners to help with,” he said.

The U.S. military has been pursuing a variety of counter-UAS capabilities.

“We have a potpourri of these things, and some work better than others. This is not an easy thing to do to counter these things, because they change and evolve so rapidly. So if we had some kind of magic, you know, drone jammer that would get parked on our [forward operating base], or put in our vehicle that we could — when a drone shows up, we press a button and all the drones go away, that’d be awesome. I think that’s a growth industry,” Townsend said.

The Senate Armed Services Committee’s version of the fiscal 2023 National Defense Authorization Act would direct the Pentagon to come up with a new strategy to counter swarms of drones by state or non-state actors. The bill highlighted directed energy weapons — such as high-powered lasers or high-powered microwaves — as promising technologies that could help address the threat.

Townsend took the helm at Africom — which is headquartered in Stuttgart, Germany, and oversees U.S. military operations in Africa — in 2019. Last month, President Biden nominated Marine Lt. Gen. Michael Langley to be his successor and receive his fourth star. Langley is expected to be confirmed and become the Marine Corps’ first Black four-star. 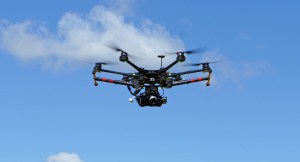